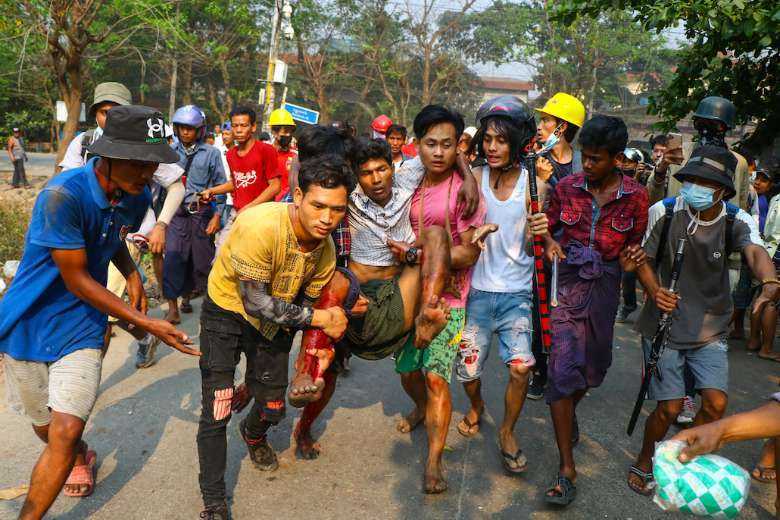 A protester injured during a crackdown by security forces is carried to safety in Yangon's Hlaingtharyar township on March 14. (Photo: AFP)

The United Nations and right groups have strongly condemned the worsening bloodshed in Myanmar as at least 38 people were killed in the military’s crackdown on protesters on March 14.

Christine Schraner Burgener, the UN’s special envoy on Myanmar, said she strongly condemned the bloodshed as the military defies international calls, including from the Security Council, for restraint, dialogue and full respect for human rights and fundamental freedoms.

“The ongoing brutality, including against medical personnel and destruction of public infrastructure, severely undermines any prospects for peace and stability,” she said in a statement on March 14.

“The international community, including regional actors, must come together in solidarity with the people of Myanmar and their democratic aspirations.”

She has heard from contacts in Myanmar heartbreaking accounts of killings, mistreatment of demonstrators and torture of prisoners over the weekend.

At least 22 people were killed and several wounded in Hlaingtharyar, an industrial suburb on Yangon’s outskirts, when security forces opened fire with live ammunition on March 14, according to media reports.

At least 16 people were killed in other regions including Mandalay, Bago and Hpakant-jade town in Kachin state.

The fatalities over the weekend bring the death toll since the Feb.1 coup to at least 126, according to Yangon-based rights group Assistance Association for Political Prisoners.

Some factories were set on fire in the industrial zones of Hlaingtharyar and nearby Shwepyithar, according to video footage shared on Facebook.

It urged Myanmar to take further action to stop all acts of violence, punish the perpetrators in accordance with the law and ensure the safety of life and property of Chinese companies and personnel in Myanmar.

Protesters have been suspicious of China’s role behind the military coup, with frequent demonstrations targeting the Chinese embassy in Yangon. Activists have launched a campaign to boycott Chinese-made products and foods.

In the wake of the Chinese embassy’s concern, the junta imposed martial law in Hlaingtharyar and Shwepyithar townships on March 14 evening.

On March 15, martial law was extended to four Yangon townships — North Dagon, North Okkalapa, South Dagon and Dagon Seikkan —where most of the factories are located.

Mobile data was cut off nationwide at 1am on March 15.

Phil Robertson, deputy Asia director at Human Rights Watch, said: “The horrific increase in the number of protesters killed by live fire over the weekend shows just how emboldened Myanmar’s security forces are to target protesters with live ammunition.

“The longer it takes for strong action to come from the international community, the longer Myanmar’s generals will feel they can get away with murder.”

Robertson said workers in Hlaingtharyar are already among some of the most impoverished in Myanmar. Many women’s livelihoods come from working in the garment factories burned down over the weekend.

“These same workers suffered job losses or reduction in hours due to the Covid-19 pandemic in the past year, and now they must face martial law and fear being gunned down on the street by the Myanmar military,” Robertson added.

Despite the bloody crackdown, protesters continued to take to the streets in several cities on March 15 to show their defiance against military rule.