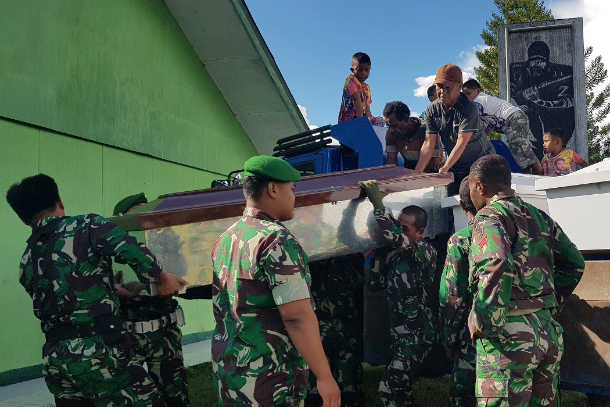 Indonesian authorities have confirmed that 20 people were shot dead by separatists earlier this week in the country’s restive Papua province, scaling down initial reports that said 31 people had been killed.

"So far, 20 died, of which 19 were workers and one a member of the armed forces," Indonesian police chief Tito Karnavian told journalists in Jakarta on Dec. 5

Earlier, more than 150 police and military personnel were drafted to investigate reports that at least 31 workers hired by a state-owned construction firm had been shot dead.

Papua police spokesman, Ahmad Mustofa Kamal, had initially said that 24 workers were killed in their camp  in Nduga district on Dec. 2, while another seven who managed to escape to the residence of a local councilor were killed a short time later.

The workers for state-owned contractor Istaka Karya had been assigned to build a 275-kilometer road in the province as part of President Widodo's signature trans-Papua road project.

One worker reportedly spotted a pro-independence rally taking place on Dec. 1 by members of the West Papua National Liberation Army (WPNLA) and decided to take a photo of it, which angered the group.

"There was a dispute after which the construction workers' camp was raided," Kamal told ucanews.com.

"It's strongly believed the killings were committed by a rebel group led by Egianus Kogoya," he said.

The rebel group, known as the TPNPB, is believed to be a faction of the WPNLA, which reportedly did claim responsibility for the killings.

Kamal said security forces were sent to the mountainous area and rescued four wounded workers who had escaped the rebels.

He also said a military unit sent to the area had been attacked and a soldier killed.

"For me, there's no negotiation. They surrender or [we] finish it. That's all," he told journalists.

The minister's approach was rejected by Reverend Benny Giay of the Synod of Christian Churches in Papua, who said violence should be dealt with through dialogue.

"Otherwise, such a conflict will never end," he said.

The reported killings came after more than 500 Papuan activists were arrested in police crackdowns across Indonesia on Dec. 1.

Many Papuans openly celebrate the date as their Independence Day, as it was the day their "Morning Star" independence flag was hoisted for the first time alongside the Dutch flag in the Netherlands in 1961.

Ones Nesta Suhuniap, a spokesman for the West Papua National Committee, blamed the government for the killings.

"The government build bridges, roads and airports in the name of their development and welfare programs. But it's non-Papuans, instead of Papuans, who enjoy the benefits," he told ucanews.com.

He urged police and military personnel to investigate the reports transparently and that any bid to resolve the violence in the province must involve the National Commission on Human Rights.