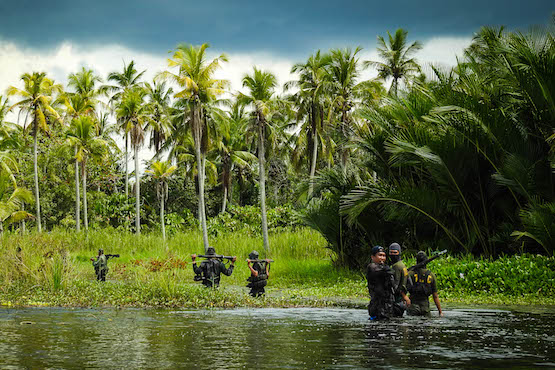 Clashes have erupted across the southern Philippine island of Mindanao, with at least 19 people dead in Basilan and Maguindanao provinces.

The new battles are seen as a spillover from the conflict in Marawi between Islamic State group-inspired forces and the government, now entering its fourth month.

The latest clashes are expected to worsen the problem of displacement, adding to the half a million left homeless by the main conflict.

In the battle scarred Islamic city, community leaders loyal to President Rodrigo Duterte said the breakdown of traditional power structures has prompted attacks on nearby towns struggling to deal with the influx of refugees.

In Maguindanao, about 100 kilometers away, the country's main Muslim rebel group is fighting alongside police forces, a step forward in decades-long peace efforts. But the clashes also highlight the breakdown of various rebel groups into small but increasingly extremist factions.

It lost five more fighters in succeeding weeks and said opponents, numbering around 50, also suffered an undetermined number of casualties.

In Basilan, 500 km away from Marawi on the western coast of Mindanao, military officials said nine people were killed and many injured in an Abu Sayyaf attack on Aug. 21. Officials said the group also burned four houses and a village health center.

Lt. Gen. Carlito Galvez, commander of the military's Western Mindanao Command, said the small extremist group exploited the pullout two months ago of a government battalion from the province. Government pursuit has spilled over to adjoining towns, prompting fears of displacement. The Marawi clash, which has killed at least 700 fighters and civilians, started with the government claiming there were only a few dozen local rebels involved. It later said several hundred to a thousand fighters had infiltrated Marawi, using an international religious convention as cover.

Stiff resistance led to military aerial bombardment of the city, with large areas reduced to rubble. Despite the bombardment, the military has admitted that several hundred fighters escaped encirclement.

The BIFF, which has around 500 men, appealed to the new group, asking it to stop fighting fellow Muslims.

Abu Amir, a BIFF spokesman, said the new group's leader has released video footage of his men pledging allegiance to the IS.