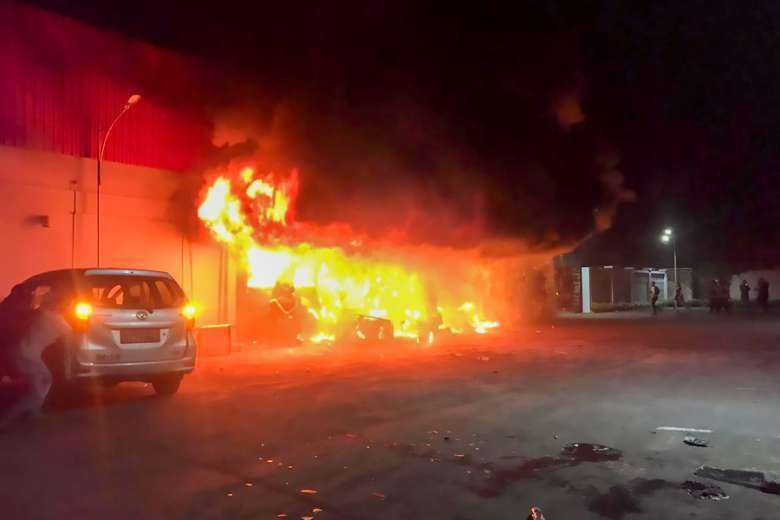 A fire burns on Jan. 25 at the Double O nightclub where at least 18 people were killed in clashes between two groups in Sorong in Indonesia's West Papua province. (Photo: AFP)

At least 18 people were killed during clashes between two groups at a night club in the town of Sorong in Indonesia's West Papua province, with most dying after the venue caught fire.

"The clash broke out last night [Monday] at 11pm. It was a prolonged conflict from a clash on Saturday," Sorong police chief Ary Nyoto Setiawan said in a statement.

One victim was stabbed and 17 more died in the blaze at the Double O nightclub, officials said.

"We found 17 bodies in Double O. They were all found on the second floor. We have evacuated the bodies to Selebe Solu Hospital," said Sorong Police's health division head Edward Panjaitan.

Police said the clash did not involve locals in remote West Papua, where there is a long-running, low-level insurgency.

They were investigating the cause of the fire, which gutted the large red and white building. A burnt-out vehicle was seen lying on its side by the club's blackened entrance as officers guarded the site.

"The club was burnt from the first floor. We tried to evacuate as many people as possible, but after the firefighters extinguished the fire this morning, we found some bodies there," police chief Setiawan said.

Police said the conflict was between two ethnic groups.

"It actually started with a misunderstanding between two members of the respective groups," Setiawan said. "We tried to mediate between the groups, as we called their leaders before last night's clash."

Police have deployed forces in the town to prevent any further clashes.

Sorong, gateway to the coral-rich Raja Ampat islands, is the largest city in West Papua province and home to a major port.

It is relatively quiet compared to other regions of West Papua, which have seen clashes due to the ongoing insurgency between separatists and Indonesian security forces.

Rebels have recently escalated their fight, targeting road contractors, as well as schools and clinics they say have links to the military. Authorities have responded by reinforcing deployments of troops and police.

The province shares a border with independent Papua New Guinea on the island of New Guinea, just north of Australia.

The subsequent vote in favour of staying part of Indonesia, approved by the UN at the time, was widely considered a sham.