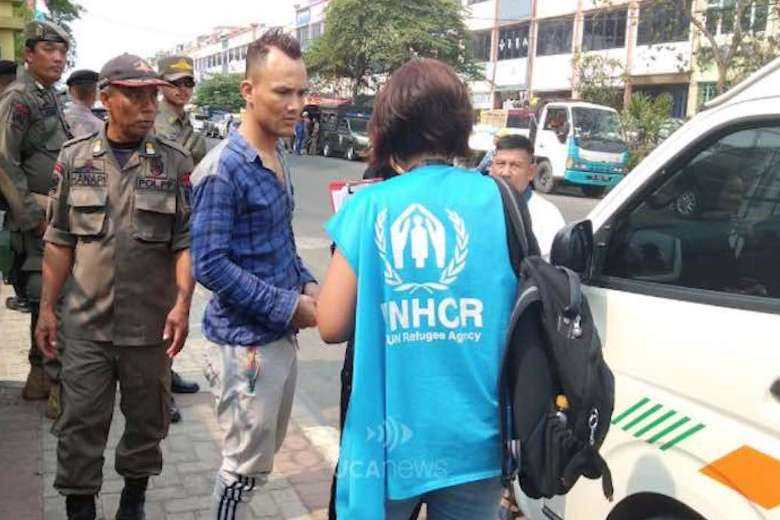 In this file photo, an officer of the UNHCR speaks with an Afghanistan refugee in Jakarta. (Photo by Konradus Epa/ UCA News)

By UCA News reporter and AFP

The self-immolation of an Afghan refugee in Indonesia has prompted Catholic officials to ask the government to handle refugees with more accountability and collaboration.

Ahmad Syah, a 21-year-old Afghan asylum seeker, doused himself with gasoline and set himself on fire on Nov. 30 when he was taking part in a demonstration in front of the representative office of the United Nations High Commission for Refugees (UNHCR) in Medan, North Sumatra. The man suffered severe burns and was sent to a hospital.

The government must handle refugees with “accountability and in collaboration” with non-governmental agencies, said Gading Gumilang of the Jesuit Refugees Service, an international church agency.

“The first step should be collaboration to fulfill the needs” of refugees living in Indonesia. Our principle must be humanity first,” he told UCA News.

Thousands of refugees, more than half from Afghanistan, are stuck in limbo in Muslim-majority Indonesia while they wait for resettlement elsewhere as Jakarta prohibits them from working legally.

Indonesia has not ratified the 1951 UN convention, making refugees vulnerable to arrest and deportation to their countries

Juma said at least 14 Afghan refugees had taken their own lives in Indonesia in recent years and six others had attempted suicide.

According to UNHCR, in 2020 Indonesia had at least 13,743 refugees from various conflict countries, most of them from Afghanistan. Their number is estimated to have increased after the recent US pullout from Afghanistan.

Indonesia has not ratified the 1951 UN convention, making refugees vulnerable to arrest and deportation to their countries.

However, the government has permitted UNHCR and the International Organization for Migration to operate in the country and handle refugees.

Activists say refugees lack facilities for education, health care, accommodation and employment despite thousands of them living in the country for more than five years.

Tanny Taher of the Community of Sant’Egidio, another international church group that works with refugees, said the refugees do not get any government support.

“They don’t have rights. Their children can’t attend school and they cannot work in Indonesia. But they were allowed to live in this country. They live through the help of NGOs and church groups," she said.

Refugees live in rented houses and makeshift shelters. Church groups also pay housing rents for some and meet the daily needs of some others, Taher said.

The Catholic Church in Indonesia, including Jakarta Archdiocese, works with the refugees by distributing food and meeting other emergencies through its charity groups such as the Community of Sant’Egidio.

Catholic officials called on the Indonesian government and the UN to do more to address the plight of refugees.

"We are very concerned and will keep coordinating with related parties to overcome the situation," she told AFP.