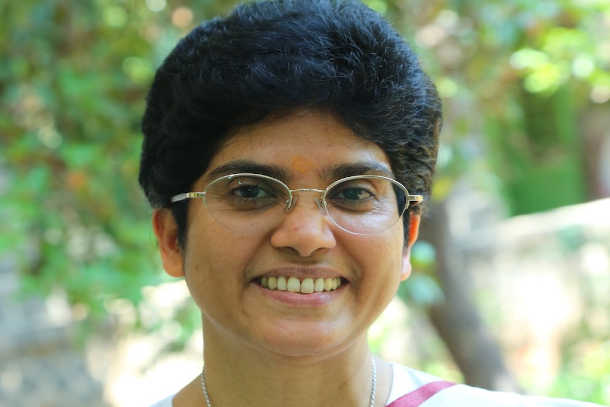 Indian Assumption Sister Rekha Chennattu was elected superior general of the international congregation of the Religious of the Assumption on July 5 at the General Chapter held in Lourdes, France. (Photo supplied)

Assumption nun Rekha Chennattu, the first Asian elected to head the global Paris-based congregation, says her priority will be to serve people on the margins of society.

Sister Chennattu, an Indian, was elected superior general of the international congregation of the Religious of the Assumption on July 5 at the General Chapter held in Lourdes, France.

"It was not my choice and so I believe that it was God's choice," said Sister Chennattu, professor of biblical studies and a participant at the Synod of Bishops on New Evangelization at the Vatican.

Focusing on neglected people would be the "identity mark" of the congregation during the next six years of her appointment, Sister Chennattu told ucanews.com.

"All throughout my life, I found God's choices for me have always been better than mine," the nun said.

She is part of the Office of Theological Concerns of the Federation of Asian Bishops' Conferences and an associate faculty member at Jnana-Deepa Vidyapeeth, which is a pontifical institute of philosophy and religion based in Pune, India.

The Assumption congregation was founded in 1839 in France by St. Marie-Eugenie of Jesus and now has sisters from more than 40 countries serving in 33 nations of the Americas, Asia, Africa and Europe. In India, they have communities in the states of Kerala, Maharashtra, Bihar and Jharkhand.

The nun, a member of the Kerala-based Syro-Malabar Church, said she will be totally committed to her new role and count on the support of her sisters around the world.

Sister Chennattu said they are dedicated to helping people such as migrants, the homeless and poor Dalits formerly known as "untouchables."

It was a guiding principle to work on "the frontiers at the service of life."

A statement from the Religious of the Assumption nuns said that the general chapter looked forward to a period of grace and rebirth.