Farmers burn an effigy of Indian Prime Minister Narendra Modi in Amritsar on May 26 while observing a Black Day marking six months of continued protests against the government's agricultural reforms. (Photo: AFP)

Undeterred by the Covid-19 pandemic, people in Asia have poured onto the streets in the past year to demand democratic and economic rights while condemning authoritarian regimes intent on cracking down on civic freedoms.

The annual State of Civil Society Report 2021 from global civil society alliance CIVICUS describes the massive people’s mobilizations that swept Asia, leading to breakthroughs in democracy and human rights across the continent.

The success of collective action was demonstrated in India, where the largest coordinated strike in world history forced Prime Minister Narendra Modi’s government to negotiate on agricultural reform laws that would threaten farmers’ livelihoods.

In November, tens of thousands of Indian farmers took to the streets to protest at the legislation and on Nov. 26 they were joined by over 250 million workers from a wide range of industries. Modi, who initially dismissed farmers’ demands, was forced to listen.

“Talks would not have happened without the protests. Protesters have forced a government that normally stubbornly refuses criticism to the table. In a country where the government has worked to repress dissent, the farmers’ protests came to serve as a vital space where people sharing a sense of dissatisfaction, of being left out and not listened to, could come together and find common cause,” stated the CIVICUS report.

In Myanmar, the army’s unwillingness to relinquish power led to a military coup in February that sparked pro-democracy protests across the country. A non-violent civil disobedience movement quickly arose, enveloping people from all walks of life.

“The civil disobedience campaign by public service workers, activists and wider society spread fast across the country and enjoys overwhelming support. These actions reflected the intensification of people’s desire for a civilian democratically elected government,” Bo Kyi of the Assistance Association of Political Prisoners is quoted as saying in the report.

Protesters have been joined by strong international solidarity and the focus has moved to economic action, such as strikes and business shutdowns, in the hope of undermining the economic basis of the dictatorship.

The resilience and innovation of civil society was seen in other Asian countries. In Thailand, tens of thousands of protesters called for democratic reforms, including, for the first time, demanding a curb on the powers of the monarchy.

Giant inflatable ducks were brought to protests — initially a joke, they were later used as shields against tear gas and water cannons; activists also held Runs Against Dictatorship, and at a protest in August people donned Harry Potter attire and waved wands, identifying as forces of good fighting an ill-intentioned government. 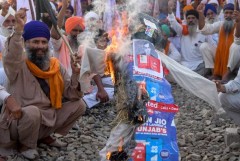 For authoritarian states, the pandemic provided a smokescreen to press ahead with repressive legislation.

While the world was distracted by Covid-19, in June the Chinese state introduced the national security law in Hong Kong that criminalizes offenses such as sedition, subversion and threats to national security. The law is so broad that it gives the authorities free rein to crack down on dissent and there have been mass arrests of democracy activists since its introduction.

Hong Kong’s democracy movement tried to keep alive a protest space while staying on the permitted side of the law by adopting more subtle protest tactics, such as putting up walls of blank notes, or holding up blank signs rather than signs bearing slogans. However, in the end many young activists had to make the painful decision to either face jail or flee the country.

Several leading dissidents fled to the UK, where they set up an advice platform, Haven Assistance, to offer help for Hongkongers seeking to flee and keep up the resistance from abroad.

Throughout the pandemic, the irreplaceable role of civil society has been highlighted

Not all Asian states used the pandemic as a pretext to restrict rights. Some states, notably South Korea and Taiwan, got the virus under control, won public trust and communicated pandemic response measures clearly while largely respecting rights and upholding democratic freedoms. This showed that the path of repression taken by many was not a necessity but a choice.

Throughout the pandemic, the irreplaceable role of civil society has been highlighted. Activists, civil society organizations and grassroots groups have provided practical help, shared vital information and held states to account over the decisions they made.

In Malaysia, for example, the government blamed migrants for spreading Covid-19 and confined them in overcrowded detention centers. To support migrants, civil society organizations worked together, creating a supply chain and an online platform to connect Malaysians with migrants and refugees in need. They also took to online platforms to push back against increasing xenophobia.

Solidarity with migrants was also seen in Thailand, where the Soi Dog Foundation distributed food to families of migrant workers whose work in construction and leisure industries had ground to a halt.