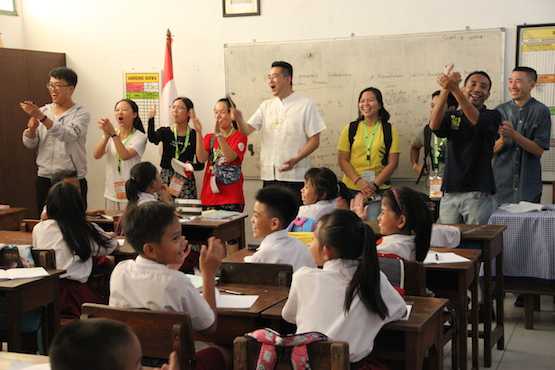 For Grace Nastiti, a 28-year-old woman from St. Stephen's Parish in Malinau district of North Kalimantan, every live-in program has a different story.

"I have joined live-in programs several times. But this one is so different because we come from different countries and have different cultures," she said.

Nastiti, who works as a nurse at a local hospital, was among 31 young Catholic people from East Asia, Indonesia and the Philippines that participated in a three-day live-in program hosted by the Central Jakarta Deanery of Jakarta Archdiocese and coordinated by St. Paschal Parish in Cempaka Putih.

The live-in program was a preliminary event of the 7th Asian Youth Day (AYD) festivities, being held on August 2-6 in Yogyakarta. The live-in program began July 30 and featured sharing and exposure, with more than 2,000 delegates from 21 Asian countries staying with local Catholic families in the archdiocese's eight deaneries, as well as in ten other dioceses in the country, including Bogor Diocese.

During the deanery's live-in program, participants had a chance to visit a prison, different places of worships and a clinic, school and shelter for the poor and sick managed by the parish.

"The live-in program was truly amazing. I learned about how to serve others. It is people helping people," she said.

Besides, staying with a local Catholic family was like a dream come true, Nastiti said.

"My parents have separated and re-married. They even converted to Islam. So staying in such a complete family brings me joy. It strengthens me," said Nastiti, who has lived with her Protestant aunt since her parents separated in 2000.

The only challenge was the language barrier. "I stayed with another participant from East Asia in the family's house. We both cannot speak English well. But we can still communicate through body language," she recalled.

She promised to share her experience with other young people in her parish and to create an action plan after returning home. "This is my commitment," she said.

John Kit Bello Estuya, a 23-year-old university student from the Philippines, joined a live-in program coordinated by Bogor Diocese in West Java. He was impressed with a tree planting activity.

"It is in line with Pope Francis' encyclical Laudato si', which talks about protecting the earth. As young people, we have to put this call into practice," he said.

In Laudato si', issued in May 2015, the pope called for swift action on climate change, among other issues.

The live-in program also enriched his Catholic faith. "It helped me deepen the quality of my life and encouraged me to build solidarity with other people from different religious background and to bring joy to others. Despite our differences, we are always joyful to become witnesses," he said.

According to Simon Lamakadu, who coordinates the service desk at St. Paschal Parish in Cempaka Putih, the live-in program aimed at encouraging young people to pay more attention to all of creation.

"We want them to care about other people and their surroundings. In a concrete way, we want them to go out into the field, to see the real situation, and then to do something to serve others and to protect nature," he said.

"It is like Jesus himself who came to serve his people," he noted.

For Bishop Buenaventura Malayo Famadico of San Pablo in the Philippines, the live-in program taught the young people to accept their differences.

"It is a chance for them to live in a family. This is fundamental. They also learn how to relate with people other than the members of their own family," he said.

Even though there was a language barrier, he believed young people could still unite. "It covers up the barrier. What comes to the front is that they decide to be united," he noted.

"We know that there are global threats against young people and society, such as global warming, natural disasters, drug abuse, violence, terrorism and radicalism. Therefore let us work together for the common good so as to create true love and peace on this globe," he said.