At least 2,000 young Catholics called to be agents of change during opening Mass and ceremony 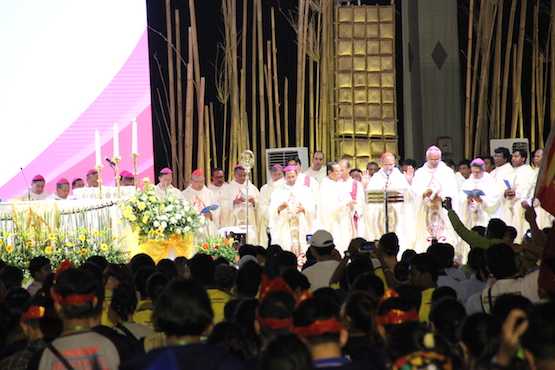 Cardinal Patrick D'Rozario of Dhaka, chairman of the Office of Laity and Family of the Federation of Asian Bishops' Conference, officially launched the 7th Asian Youth Day (AYD) festivities in Yogyakarta on Aug. 2.

Also present for the opening Mass were Indonesian bishops' conference chairman Archbishop Ignatius Suharyo Hardjoatmodjo of Jakarta and its secretary-general Bishop Antonius Subianto Bunyamin of Bandung,  Bishop Pius Riana Prapdi of Ketapang, chairman of the bishops' Commission for Youth, 52 other bishops and 158 priests.

More than 2,000 young people from 21 Asian countries attended that Mass at the Jogya Expo Center in the Indonesian city.

In his homily, the Bangladeshi cardinal compared the AYD festivities — being celebrated under the theme "Joyful Asian Youth! Living the Gospel in Multicultural Asia" — to the Pentecost in which people of different cultures and languages gathered in communion.

"You have come from different cultures, ethnic groups and nations. And you have come together to rejoice in the Lord," he told the gathered youth.

Young people "are sent to be centurions also to see the needs of the people and to bring Jesus to them and to bring them to Jesus," he said.

Speaking to ucanews.com, Cardinal D'Rozario said youth "live their faith in their own cultures. And when they come together, they share their experiences, that is an inspiration to others."

The AYD festivities are not just about sharing by church leaders but by young people themselves because "that is the Joy of the Gospel," he said.

"We grow up in diverse cultures, but we can live together. We learn from others and others learn from us," he said, hoping that the Aug. 2-6 program will encourage young people to build networks that can be used as means for evangelization. Participants from each country stand with their banners.  (ucanews.com photo)

Speaking during the official opening ceremony after the Mass, Indonesia's Religious Affairs Minister, Lukman Hakim Saifuddin, stressed the importance of promoting solidarity between the young people participating in the Asian Youth Day festivities.

"Your presence shows the commitment of solidarity to live together in the diversity of culture, race and nation. This spirit is in line with the program's theme which is to spread the Good News to the Asian region," he said.

Such diversity should lead young people to the acceptance of others so there will be no space for racial or religious prejudices in the world.

He called on participants to be agents of change to make the world a better place.

"The most important thing is that you all, as young Catholics particularly in Indonesia and generally in Asia, can spread religious values though dialogue and cooperation to create social justice and peace," he said.

"Can you be neighbors for other religions?" he asked them, expressing hope that the program will help build interreligious relations between participants and others from different religious backgrounds.

One participant, Niccolas Joseph from Yangon, promised to become an agent of change because in some Asian countries like Myanmar, "We still can see conflicts."