Indonesia's parliament speaker, Setya Novanto (left), waits for his first trial at a corruption court in Jakarta in this Dec. 13, 2017 photo. He is accused of taking kickbacks from funds for a government project to issue new identification cards. Indonesia was named as one of many Asian countries by Transparency International as having failed to combat corruption over the last year. (Photo by Bay Ismoyo/AFP)

Governments around the Asia Pacific region continue to fail in combating corruption, according to the latest Corruption Perceptions Index released by Transparency International last week.

The global civil society organization campaigning against graft noted that this year's index shows a "high variance in public sector corruption" across the region.

Cambodia, North Korea, and Afghanistan were among the "worst scorers" in the index while more than half the countries in the region scored less that 50.

On a scale of 0 to 100, where 100 means very clean and 0 reflects a deep-rooted, systemic corruption problem, Asia Pacific countries, on average, are failing. 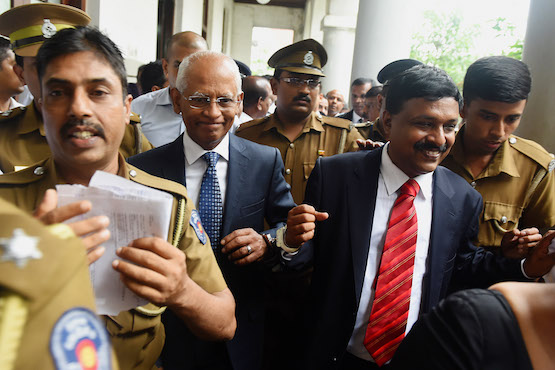 "Our analysis reveals little progress across the region," read a statement from Transparency International.

The group noted that in the past six years, only a few countries have experienced "small, incremental changes" indicating signs of improvement.

The organization reported that in some countries in the region, journalists, activists, opposition leaders, and anybody who tries to challenge the status quo are threatened, and even killed.

The Philippines, India, and the Maldives are among the worst regional offenders, Transparency international noted.

"These countries score high for corruption and have fewer press freedoms and higher numbers of journalist deaths," the group said.

The New York based Committee to Protect Journalists reported that 15 journalists working on corruption stories in the three countries were murdered last year.

The anti-corruption organization said that while freedom of expression is under attack across much of the region, "civic space is also shrinking severely."

It said that civil society groups in countries like Cambodia, Papua New Guinea, and China are permanently under threat from authorities.

In Cambodia, the government recently cracked down on civil society with the introduction of a restrictive law against non-government organizations.

The Philippines ranked lower in the 2017 report compared to the past two years. It is not indicated in the index whether the government's war against narcotics affected the lower ranking.

Thailand is doing a little better, falling to 96th place in the latest index from 101st place a year ago.

Malaysia slipped seven spots to 62nd, scoring 47, after reports of a billion-dollar graft scandal into its sovereign wealth fund surfaced.

Singapore maintained its place among the top-ten. India and Indonesia both slipped, while Vietnam advanced six ranks.

Although the report noted that Indonesia has a long way to go in the fight against corruption, the Southeast Asian country climbed up the index, moving from 32 to 37 in the last five years.

The report noted that other countries, like South Korea, remained "fairly stable" in their scores over the last six years.

India was ranked 81st in the latest index, losing two spots from 2016 when it was ranked 79th.

The report also branded India as one of the "worst offenders" in terms of graft and press freedom in the Asia Pacific Region.

The anti-corruption group said improvements in the fight against corruption "will only be made if there is strong political will for change."

The group said a "comprehensive strategy" needs to be adopted, "not one based on isolated actions," adding that laws and institutions should be in place to prevent corruption.

It added that legal frameworks and access to information are essential components of a "healthy political system" where people play a role in demanding accountability.

Protection for those who expose anomalies especially in government is also "a must in the Asia Pacific region," said the group.

The Corruption Perceptions Index was released in the same week Amnesty International reported that human rights situation in the Asia-Pacific region had been characterized by government failures.