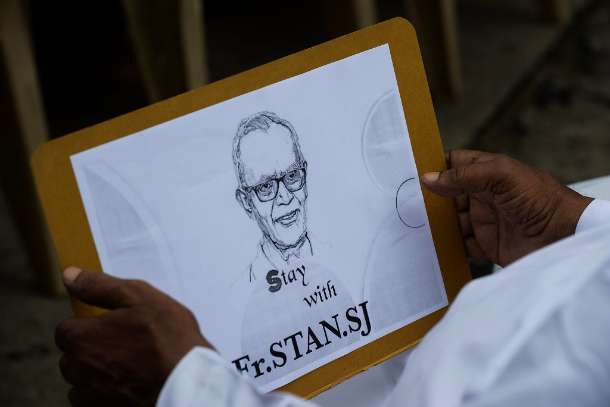 The Federation of Asian Bishops’ Conferences (FABC) has said it stands in solidarity with Indian Jesuit priest Father Stan Swamy and all who support the rights of indigenous people.

“It is with great shock and agony the FABC heard of the arrest of the 84-year-old Father Swamy and his incarceration and we are surprised at the charges brought against him,” Cardinal Charles Bo of Yangon, president of the FABC, said in a statement.

“The arrest and cold-hearted incarceration of Father Swamy reminds us of the treatment meted out to Mahatma Gandhi when he stood up for the rights of the Indian people.”

He said Father Swamy was following Gandhi’s non-violent path to realize his dream.

“The arrest is symptomatic of the treatment meted out to indigenous people in various parts of Asia,” Cardinal Bo said in an appeal on Oct. 26.

He said from the shores of South China Sea to central India is a vast land which was once the homeland of indigenous people.

“Colonization destroyed them, nation states disenfranchised them. Thousands have perished in the ecocide-killing of the biosphere,” he noted.

The 72-year-old prelate said the Asian market economy and its enablers have treated indigenous communities with a colonial mentality, making them environmental refugees.

He added that the world is indebted to indigenous communities for protecting nature and giving it to the world. The forest and biosphere where the indigenous people lived proved to be the “lungs of the world.”

“When Asian governments choose to evict the indigenous people and offer their lands for corporate gain, they are opting to infect the lungs of the world. This is ecological Covid,” Cardinal Bo stressed.

He quoted Pope Francis, who has called for protecting the precious lungs like the Amazon, Congo and Asian forests.

The outspoken cardinal urged the relevant authorities to acknowledge the role indigenous people play in the welfare of the world and release their people and those who support them, such as humanists like Father Swamy who are trying to save the world from the ecocide.

“We do hope its leaders will show sagacity and magnanimity in appreciating the services of Father Swamy and other indigenous people’s leaders, releasing them as free citizens of India,” said Cardinal Bo.

Father Swamy was arrested on Oct. 8 on sedition charges and links with an outlawed Maoist group by the National Investigation Agency, the federal anti-terror combat unit. He completed 14 days of judicial custody on Oct. 22.

The priest is accused of inciting violence in Bhima-Koregaon, a town in Maharashtra, on Jan. 1, 2018, in which one person was killed and several others sustained wounds.

He is among 16 persons facing trial for sedition, conspiracy and links with Maoist rebels, among other serious charges.

Civil society groups in India continue with street demonstrations, webinars and online petitions seeking the release of the 16 arrested and jailed.