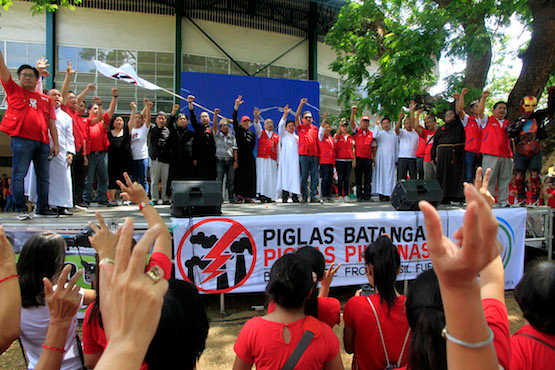 Archbishop Ramon Arguelles of Lipa, center, leads environmental activists in calling for an end to the use of coal and other dirty and harmful energy during the launch of "Break Free from Fossil Fuels 2016" in Batangas City on May 4. (Photo by Jimmy Domingo)

A Catholic bishop in the Philippines called on Asian church leaders to stand against the use of coal and other dirty and harmful energy at the launch of a globally coordinated effort to escalate the fight against fossil fuels on May 4.

"I call on all bishops in Asia ... We must support the promotion of clean and renewable energy," said Archbishop Ramon Arguelles of Lipa at a "Break Free from Fossil Fuels 2016" demonstration in Batangas City.

The prelate said that despite previous church statements against the use of fossil fuels many Catholic leaders in the region remain silent.

"I challenge the bishops to publicly speak out and condemn coal. We have to do what God told us to do, to protect the environment," said Archbishop Arguelles.

"As shepherds, we must lead the fight to break free from dirty energy," he added, saying that church leaders "need to show full commitment" to Pope Francis' encyclical on the environment and climate change.

In 2015, Pope Francis issued the encyclical Laudato si' to call on Christians to act on climate change and protect the Earth, urging solidarity for the poor and most vulnerable to the effects of global warming.

As the Philippines prepares for May 9 general elections, Archbishop Arguelles also appealed to voters to elect "leaders who are pro-people and pro-environment, not pro-coal and pro-climate change."

The prelate said the country "deserve a government that will do everything to protect Filipino families from the ravages of dirty energy and climate change."

"It is immoral to burden future generations with pollution and the cost of mistaken energy choices made today. It is time to end the age of coal," he said.

Thousands of people participated in the protest march in Batangas City, which highlighted a campaign by activists against a proposed 600-megawatt coal plant in the city.

"The proposed coal plant will only make it harder for us to breathe, much less fish," said Reymond Mendoza, a 27-year old fisherman from Simlong village, where a petrochemical and naphtha cracker feedstock plant is operating.

Ian Rivera, national coordinator of the Philippine Movement for Climate Justice, said the protest action is also demanding from the government the phaseout of 19 existing coal plants in the country.

"The next administration must review the current one's commitment to reduce 70 percent of our country’s emissions by 2030," Rivera said.

"Break Free from Fossil Fuels 2016" is a worldwide movement of direct actions across 12 days and six continents to call on governments around the world "to concretely respond to the climate crisis and the urgent need to keep global warming below 1.5 degrees Celsius."