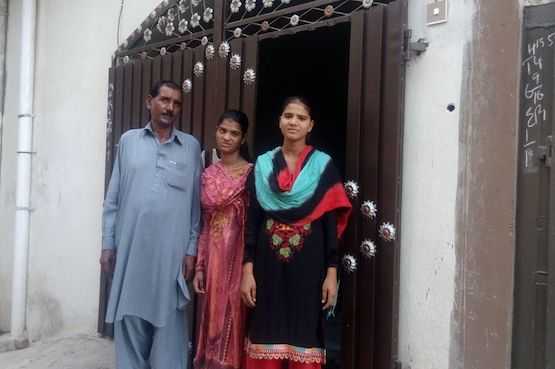 Ashiq Masih with his daughters, Esha and Esham in Lahore. Their Catholic mother is currently embroiled in a blasphemy case, on death row. (Photo by Joseph Nadeem)

When imprisoned Aasiya Noreen, better known as Asia Bibi, was visited by her husband, he noticed her solitary confinement cell had been rearranged.

The Bible was still on the floor by her wooden bed in the six square meter cell but the television was outside the bars.

For Bibi, the TV was her only window to the outside world. "But now she has to depend on the goodwill of the Punjab prison authorities to turn it on. She keeps herself busy by praying and cleaning her cell and the attached toilet," said her husband, Ashiq Masih.

Bibi was arrested in 2009 after being accused of insulting the Prophet Mohammed. Her fellow farm laborers leveled the accusation following a heated argument about sharing a bowl of water.

The Catholic mother of five, who denies the charge, was the first woman to be sentenced to death under Pakistan's blasphemy laws. But her case has become controversial due to the deaths of three men during her trial.

One of them was Punjab Governor Salman Taseer who was shot dead by his police bodyguard Mumtaz Qadri in 2011 because he criticized the country's blasphemy laws and defended Bibi. Two months later, the Catholic minister for minorities Shahbaz Bhatti was assassinated for trying to amend the same laws. Qadri, the bodyguard-turned-assassin, was hailed by extremists even as he was executed for murder at Adiala Jail in 2016.

Violent protests followed and the government banned media coverage of his funeral attended by huge crowds. Fundamentalists still visit his shrine in Athaal village, about 5 kilometers from the national capital Islamabad, where they revere Qadri's six-year-old son, showering him petals and money.

The bodyguard's execution sparked death threats and a surge in demands for Bibi's execution. She had to be moved to solitary confinement at the women's prison in Multan for her own protection. Bibi's Muslim lawyer, also reported receiving death threats since taking up the case in 2014.

"We know she is innocent; prayers are being conducted for her," the priest said. "Our staff was involved in initial fact finding of the case but ever since her family came to Lahore, we do not interfere in the matters of other NGOs," he said.

"In the beginning, people tried to offer her freedom on condition of either converting to Islam or marrying a Muslim man but her Catholic faith was strong. We have trust in the house of the God. The whole world knows our plight. As soon as she is released, we will leave the country," said husband Ashiq Masih, who is now sheltered by the Renaissance Education Foundation in Lahore.

Together with his two daughters, Ashiq Masih now lives in Youhanabad (the largest Christian colony in Pakistan). It is their fourth house since Bibi's arrest. Two of his children are now married while the younger daughters, one of them disabled, are at school.

"At first I used to hide my face with a muffler but slowly I gained confidence. Although I freely travel to other cities, I never discuss the case details," said Ashiq Masih, a retired soldier, who addressed the United Nations in 2016 and met Pope Francis in 2015.

In 2010, the Pope Benedict XVI launched an appeal for Bibi's "full freedom." Several national and international organizations have also launched signature campaigns for her. Protests as well as prayers have been held in Pakistan and in other countries.

However, in the view of Joseph Nadeem, executive director of the Renaissance Education Foundation, most of these groups have done little to help.

"More than 70 NGOs claim to support them and their annual reports make tall claims. They invite us to meet foreign delegations but ignore us after the interviews and photos are done," said Nadeem, who acts as Masih's official translator.

"The extraordinary coverage by both media and non-governmental organizations has attracted unnecessary attention. This has resulted in fierce opposition from religious groups. The courts have freed Christians accused of blasphemy in the past but the celebrities, associated with our case, have caused more hype than help."