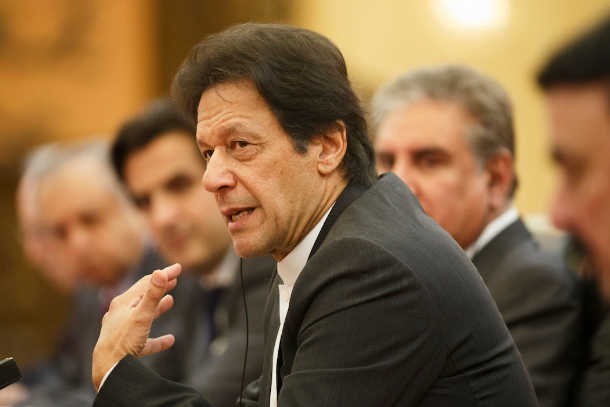 By ucanews.com reporters, Karachi and Lahore

Pakistan Prime Minister Imran Khan has said that Asia Bibi remains in the country, negating speculation that she had already joined her family in Canada.

Khan told the BBC in an interview published online on April 10 that Bibi was still in Pakistan because there was “a little bit of a complication” which he declined to explain.

"But I can assure you she is safe, and she will be leaving in weeks," Khan said during the interview conducted in London.

The Catholic mother of five had been on death row for blasphemy since 2010 and was held in solitary confinement for eight years.

In a landmark judgment, the Supreme Court of Pakistan quashed her death sentence in November last year and ordered her immediate release from prison.

The ruling, however, sparked violent nationwide protests that came to an end only after the government agreed to stop Bibi from leaving Pakistan until a challenge to her acquittal was heard by the top court.

The court, however, upheld Bibi’s acquittal on Jan. 29, allowing her to exit Pakistan.

Days after the court’s ruling, she was airlifted from a prison in Multan to the capital Islamabad, where she was reportedly kept in a safe house due to death threats. Subsequent media reports stated preparations were being made for Bibi to be relocated with her family who are living in an undisclosed location in Canada.

One German media quoted her lawyer saying that she had already been flown to safety in Canada. Her current situation remains unknown.

Catholic activists in Pakistan were dismayed that Bibi had still not been flown out of Pakistan.

Katherine Sapna, the director of Christian True Spirit, said that there was “total confusion” about what Bibi’s real situation was.

“We assume that she is in a protective place,” said Sapna, who is leading a delegation of politicians and activists to the Dutch parliament later this month to discuss the misuse of the blasphemy law and the forced conversions of females.

“But the confusion benefits Bibi and her family. The hard-line clerics were the biggest challenge for the state during proceedings of her case,” she said.”

Kashif Aslam, a program coordinator for the Pakistan Catholic bishops' National Commission for Justice and Peace, said that Bibi’s presence in Pakistan appears as if the authorities are waiting for a conducive time.