Asia Bibi is the bravest woman I have ever met, says activist 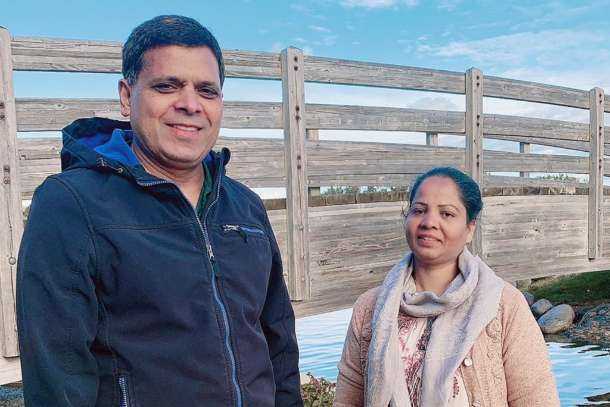 Nadeem Bhatti remembers meeting Asia Bibi a few months after she arrived in Canada after spending eight years on death row in Pakistan.

“She was kept in tight security. I was asked to stay silent until the countrywide protests ended. I kept pushing trying to meet our hero,” Bhatti, president of Canadian Aid to Persecuted Christians (CAPC), told UCA News.

“We talked for hours about blasphemy laws and her plight in prison. The meeting reminded me of the closeness often expressed by Pope Francis for others. She spoke from her heart regretting not being able to raise her daughters. She is the bravest women I have ever met. She is our hero.”

The Catholic activist has been in contact with Bibi’s two daughters since they arrived in Canada in December 2018. They were accompanied by Joseph Nadeem, a Lahore-based activist who had been taking care of her family since a Pakistani court handed her a death sentence in 2010 for blasphemy.

In a landmark judgment, the apex court quashed the Catholic woman's death sentence in November 2018 and ordered her immediate release from prison. Religious parties staged violent protests nationwide for three days, forcing the government to strike a written agreement.

But three weeks later, Khadim Hussain Rizvi, leader of the hardline group Tehreek-Labaik Pakistan (TLP), and hundreds of TLP leaders were taken into custody in an unannounced crackdown.

Meanwhile, CAPC continued its advocacy in the Great White North. “We shared the passport details of the family with a Canadian archbishop who helped with their asylum application. We continue to provide moral support,” said Bhatti.

Bibi, who was reunited with her family in Canada on May 7, 2019, shocked human rights activists when she dissociated herself from her biography in an Aug. 31 interview with Voice of America Urdu.

“I wasn’t involved in its drafting. I don’t know when she wrote it, whose story is it and who guided her for the book. I absolutely do not agree with this book because it’s not my biography,” she said, referring to French writer Anne-Isabelle Tollet, the only reporter to have met her during her stay in Canada.

In February, Bibi confirmed that she was seeking asylum in France to live closer to Tollet, who played a key role in her fight for freedom and helped write her autobiography, Enfin Libre! (Finally Free).

Bhatti came to Bibi’s defense over her controversial comments about her biography.

“We shouldn’t forget that she is still in trauma and under protective custody. She asked for translation of the draft and didn’t agree with some of the narration. She is not highly educated and didn’t leave her country by choice. Too much criticism will risk losing a potential leader,” said Bhatti, who has helped to resettle nine Christian families in Canada.

These include the driver of Shahbaz Bhatti, the former Catholic cabinet minister shot dead by gunmen in Islamabad in 2011. He had received death threats for urging reform to blasphemy laws. The slain Bhatti was also president of the Christian Liberation Front (CLF).

In the same year, Punjab governor Salman Taseer, who had also opposed blasphemy laws, was shot dead by one of his bodyguards.

In 2008, Bhatti moved to Canada after being threatened by students of the controversial Lal Masjid (Red Mosque) of Islamabad.

“As a founding member of CLF, I used to organize national gathering of hundreds of Christian youths in the federal capital. The madrasa students opposed such gatherings,” said Bhatti, who hails from Khushpur village in Punjab province.

Bishop John Joseph, Pakistan's first Punjabi bishop who killed himself in 1998 in a protest over blasphemy laws, is buried in Bishop's House, Faisalabad.

According to Punjab’s Minister for Human Rights, Minorities Affairs and Interfaith Harmony Ejaz Alam Augustine, only seven blasphemy cases have been registered against Christians in Punjab this year.

“There has been no attack on a Christian settlement since the government of Prime Minister Imran Khan came to power two years ago. Such incidents harm the image of our country. Punjab’s textbook board has formed a committee to eliminate hate material from textbooks and help in establishing peace in society,” he stated at a recent convention of religious faith leaders.

Media reports claim 42 blasphemy cases were registered in Pakistan in August. Almost 80 percent were against Shia Muslim activists and eulogists.

CAPC has demanded the repeal of Pakistan’s blasphemy laws. “These are man-made laws and have been misused, affecting everyone, even Muslims. These black laws have only resulted in creating anarchy and settling personal disputes. Most cases aim at encroachment on Christian property,” said Bhatti.

“Church leaders have spent many resources on interfaith dialogue but failed in mainstreaming religious minorities. Much more effort is needed to address the prevalent zero tolerance against non-Muslim Pakistanis.

“The era of outspoken bishops like John Joseph is gone. He was a public figure who trained us as an activist. The Church must protect her flock in coordination with the state.”