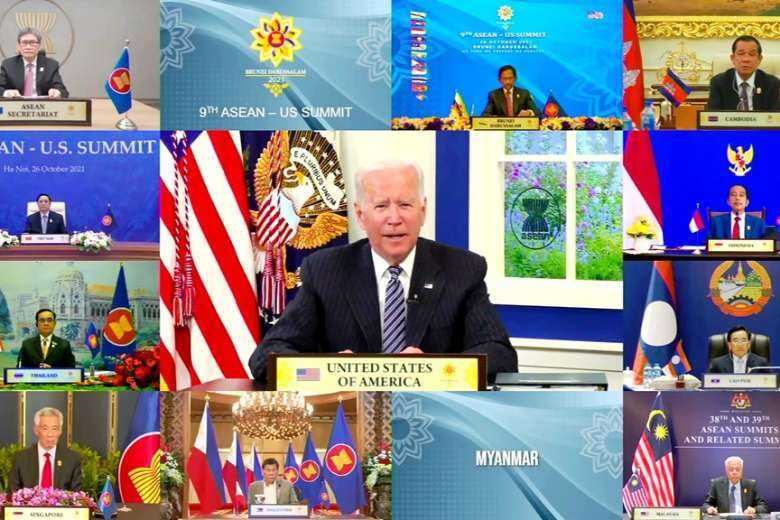 The Association of Southeast Asian Nations (ASEAN) has been urged to initiate concrete actions to resolve the crisis in Myanmar, which is at risk of becoming a failed state after the Feb. 1 military coup.

The call came from current and former Southeast Asian parliamentarians as ASEAN holds a three-day summit in the presence of world leaders including US President Joe Biden with Myanmar top on the agenda.

“We are soon approaching one year since the Myanmar military conducted its coup, launched unspeakable violence and terror against the people and devastated millions of lives,” said Charles Santiago, chair of ASEAN Parliamentarians for Human Rights (APHR), a regional network committed to advance human rights and democracy.

“This week’s summit must be the occasion for the bloc to put in place concrete steps to help the people of Myanmar, who every day since Feb.1 have so bravely displayed to the world that they do not accept this murderous junta.”

In an unprecedented move, the 10-member ASEAN bloc decided to bar Myanmar’s military chief Min Aung Hlaing from attending the summit following a lack of progress over implementing a peace plan agreed in April.

The junta did not send a non-political representative to the meeting despite ASEAN inviting a senior diplomat from the junta-controlled Ministry of Foreign Affairs.

“Now our regional leaders must use this unprecedented opportunity to step up their response even further, and make real progress on putting Myanmar back on the democratic path,” Santiago stressed.

The group has called for ASEAN to meet officially and publicly with representatives of the elected National Unity Government (NUG) formed by ousted lawmakers, activists and some ethnic groups.

It has pressed the bloc to discontinue inviting any other junta representatives to ASEAN official meetings until there is an end to violence, all political prisoners are freed and the will of the people for fully fledged democracy has been heard.

ASEAN remains divided over the issue of Myanmar and has been criticized for failing to tackle the unrest besides the delayed appointment of a special envoy who is yet to visit the conflict-torn nation.

The special envoy is tasked with ending violence and opening dialogue between the military regime and opposition groups in the beleaguered country while also overseeing a humanitarian aid package.

Biden also expressed support for ASEAN efforts to hold Myanmar's military regime accountable. The US president’s support came just a day after its national security adviser Jake Sullivan met virtually with two representatives of the NUG where he stressed US support for the pro-democracy movement and its commitment to promoting accountability for the coup.

Nearly 1,200 people have been killed by the junta since the coup in a bloody crackdown against anti-coup protesters and civil resistance groups in urban and rural areas.

Fighting has also been intensifying in ethnic areas including the Christian-majority regions of Chin, Kayah, Karen and Kachin where thousands have been uprooted from their homes and forced to take refuge inside churches, makeshift camps and forests.