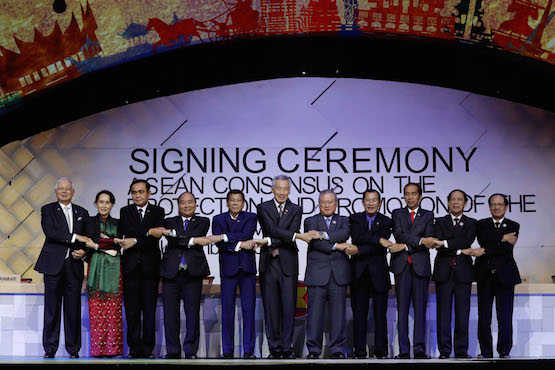 Association of Southeast Asian Nations leaders do the traditional ASEAN handshake as they pose for a photo during the regional bloc's 31st summit in Manila on Nov. 14. (Photo courtesy of the Presidential Communications Office)

In a statement at the end of the meeting, Philippine President Rodrigo Duterte, this year's head of the regional bloc, said the Rohingya situation was discussed as a matter of "disaster resiliency."

Aside from the Association of Southeast Asian Nations (ASEAN) leaders' appreciation for the "prompt response" of member states to send aid to affected communities in Myanmar’s Northern Rakhine State, there was no other mention of the Rohingya issue in the 26-page document.

A group of ASEAN parliamentarians said the failure of the summit to discuss the root causes of the crisis in Myanmar "constitutes a blow to the regional bloc's credibility."

Charles Santiago, chairman of the ASEAN Parliamentarians for Human Rights group, warned that the 10 nation bloc’s continued inaction threatens the "security and prosperity" of all member states.

He said the lack of strong commitment by member states to tackle the situation in Rakhine "represented a disappointing conclusion to discussions at the summit."

In a statement on Nov. 15, the parliamentarians expressed their disappointment over ASEAN's failure "to act decisively in the face of ethnic cleansing and crimes against humanity being perpetrated in our own backyard."

The group said there was hope that the sheer scale and severity of the crisis in Myanmar would be enough for ASEAN leaders to find a way to address the situation.

Over 600,000 Rohingya have fled to Bangladesh since August this year, when the Myanmar military launched so-called clearance operations in Rakhine State following a series of attacks on police outposts by militants.

Various human rights groups have documented human rights violations against the Rohingya, including killings, sexual violence, and the burning of homes and villages.

The regional parliamentarians said ASEAN's refusal to include the Rohingya issue in discussions during the summit indicated the bloc's failure to address the drivers of the crisis.

"This is not simply a humanitarian catastrophe; it is a human rights crisis with deep roots in longstanding state-sponsored persecution against the Rohingya community," said Eva Kusuma Sundari, a member of the Indonesian House of Representatives.

ASEAN’s approach seems to ignore the fact "and acts as though the mass displacement and associated humanitarian challenges arose out of nowhere," she said.

The parliamentarians criticized ASEAN’s "principle of non-interference" in the internal affairs of each country, arguing that the policy hampered an effective response and was being invoked by leaders in a disingenuous manner.

"The non-interference policy is — in the words of Aung San Suu Kyi herself — just an excuse for not helping," said Santiago.

"It shouldn't even apply in this case, where the issue clearly has immense regional implications," he added.

The group said ASEAN leaders should do more to pressure the Myanmar government and military to stop the attacks, end policies that promote and institutionalize discrimination, and enable conditions for the safe return of Rohingya refugees to their homes.