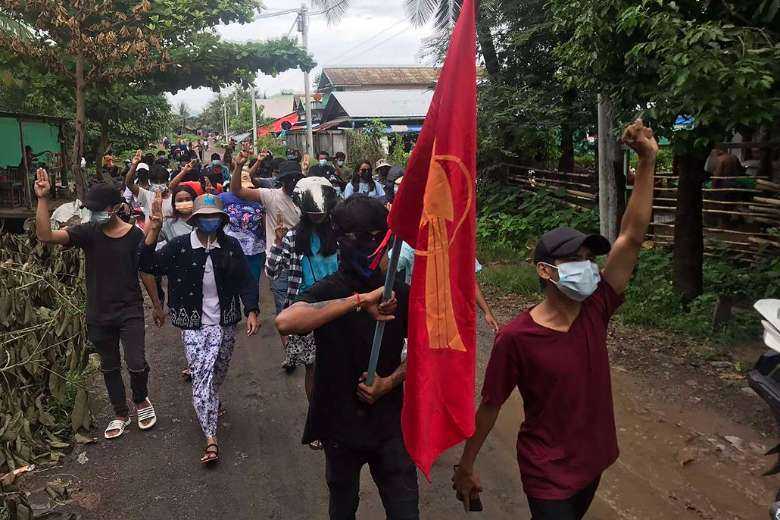 Protesters march during a demonstration against the military coup in Dawei on June 5. (Photo: Dawei Watch/AFP)

Despite the United Nations highlighting ASEAN’S diplomatic efforts, the people of Myanmar have little faith in the regional bloc’s ability to tackle the unrest following the Feb. 1 coup.

On June 5, young people in Mandalay, Myanmar’s second-largest city, burned the ASEAN flag during a protest and accused the bloc of giving legitimacy to military rule.

The meeting discussed cooperation on humanitarian issues, holding an election only when the country becomes stable, alleged irregularities in the 2020 election, and Covid-19 efforts, according to a state-run newspaper report on June 5.

ASEAN has yet to release a statement on the visit and details of the discussion.

It was the first high-profile visit by ASEAN leaders to the beleaguered Buddhist-majority country in the four months since the military seized power and toppled the elected civilian government.

We have little confidence in ASEAN’s efforts. I don’t think they have a solid plan for their credibility

People inside Myanmar, however, paid little attention to the ASEAN visit as they were waiting for the first press conference of the National Unity Government (NUG), which was formed by ousted lawmakers.

The junta cut internet access for one hour across the country when the NUG held an online press conference on June 4.

“We have little confidence in ASEAN’s efforts. I don’t think they have a solid plan for their credibility,” Moe Zaw Oo, deputy foreign minister of the NUG, said during the press conference.

He also called on ASEAN and the international community to stand with the people of Myanmar.

“My expectations for ASEAN’s response to the crisis in Myanmar were always fairly low. Now they are lower,” Thant Myint U, a local historian, said on Twitter.

The visit came a few weeks after the special summit in Jakarta in late April attended by the junta leader, during which a five-point consensus was reached.

Critics say the consensus lacked a time frame and follow-up plan as Min Aung Hlaing said the military will consider it only when stability returns.

At least 20 people were killed in a clash between the military and protesters in a village in the Irrawaddy Delta in the early hours of June 5, according to local media. State-run media, however, said three people had been killed and two were arrested during the clash.

At least 847 people have been killed and 4,642 people detained by the junta since Feb. 1, according to the latest data from AAPP.