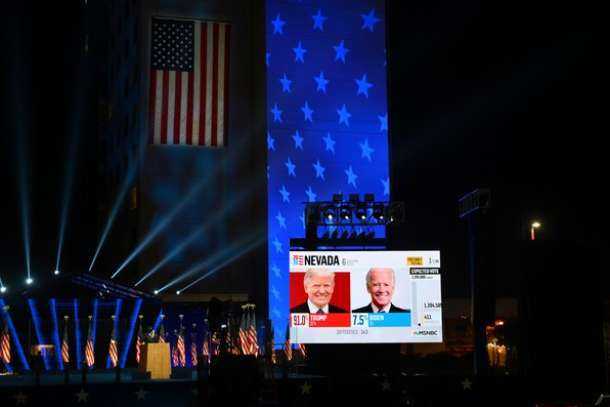 On the morning of Nov. 2, the US capital looked as if it was getting ready for a hurricane rather than an election.

Drills buzzed away, fences went up, hammers pounded, as workers rapidly boarded up buildings, from law offices, to hotels, to vitamin and coffee shops in the vicinity of the White House.

Peter Matlon, a Catholic who served in Vietnam, braved the cold and windy morning at a busy intersection just a few city blocks from 1600 Pennsylvania Ave.

His views reflect the direction Catholic voters seemed to be heading toward in this election, showing that 52 percent of "likely Catholic voters" support the Democratic nominee, former vice president Joe Biden, a Catholic, while 40 percent support the Republican incumbent, President Donald Trump.

As commuters came into the District of Columbia, Matlon held a "Serve our country, vote him out" sign just a few feet away from the Trump Hotel.

"I've been out here every day for the last six weeks or so, greeting people coming in from Northern Virginia and encouraging them to get out and to vote and to try to correct the many deep errors that have been committed over the last three four years," Matlon told Catholic News Service.

"I mostly get a positive reaction. I get a lot of honking, thumbs up, people dropping their window and screaming support," he said. "And I would say one out of 21, out of 30, shout profane vulgarities. I welcome those, too. There's obviously a lot of passion in this election."

As young man and soldier, he said he took an oath that he still respects today: to protect and defend the US constitution.

"And one of the key elements in the constitution is to have fair and free elections and to have some integrity in our governance process," Matlon said, expressing worries the president is not going to respect the will of the people if he loses.

Trump, in his opinion, has "taken us to a place where I never imagined our country" could go, and not in a good way. He said he worries about possible legal challenges to election results that Trump might look to if the doesn't get from voters the election result he wants.

He said the group he's part of, Common Defense, has joined a coalition of voters called Protect the Results to "ensure that all the votes are counted, that everybody's voice is heard."

With his opponent leading in the polls, talk about Trump's reaction to a Biden win has spurred worries around the country about potential disturbances if a legal challenge to the vote were to happen.

"It's fairly intense," said Matlon about the tension in the nation's capital and about a possible legal challenge. "We're hoping that doesn't emerge. I'm hoping it's a landslide so that they'll be no prolonged conflicts, legal or otherwise."

But a decisive path to victory still is not clear for either candidate. Battleground states such as Florida showed a race too tight to call.

Trump has been an avid campaigner, holding large in-person rallies in places like Wisconsin, North Carolina, Florida, Michigan and Pennsylvania even in the midst of a pandemic. The gatherings proved a winning strategy last time as he cobbled together niche constituencies, such as Cuban Americans, in electorally rich places, like Florida.

There, he was able to win over Catholic voter Gloria Lopez, of Miami-Dade. She said she took part in early voting a few days before the Nov. 3 election and cast her vote for Trump. As a business owner, she's been able to stay afloat during the pandemic thanks to the stimulus money offered under Trump, she said.

She feels that the president has helped the economy do well, and she agrees with his immigration stance, saying "there have to be limits" and the presidents of other countries "are responsible for the misery" of their nations.

"A country without an economy cannot function," she said to CNS.

In other issues that matter to her, such as Cuba, where Trump applied stricter sanctions after taking office, "there is no solution other than that they open themselves to the world, as the Catholic Church has said," Lopez said.

It's voters like Lopez who Trump hopes will get him to a second term.

By Nov. 1, the Miami-Dade Elections Department had reported that more than 1 million voters already had cast their ballots, many of them Republicans like Lopez.

But worries surrounding voting, access to polling places and even physical intimidation of voters were mounting on the eve of the election.

The Department of Justice announced it would be sending monitors to select jurisdictions around the country Nov. 3, though it said it was a routine move.

"The Justice Department historically has monitored in jurisdictions in the field on Election Day, and is again doing so this year," the department said in a release on its webpage Nov. 2.  "The department will also take complaints from the public nationwide regarding possible violations of the federal voting rights laws through its call center."

As Election Day Eve wore on, reports circulated the White House was going to erect yet another fence in front of one that surrounds a public park near the president's residence — a taller "non-scalable" fence that was present during protests earlier this summer.