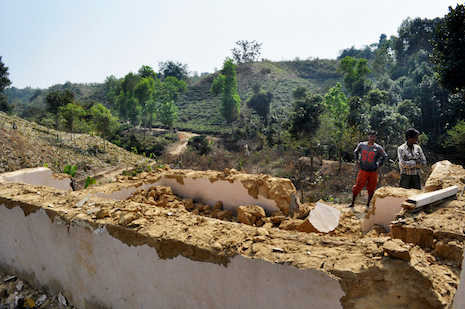 Tribal men from the Lakhaichhera tea estate village in Sreemangal stand in front of their torn down home, allegedly vandalized by an armed mob from a local tea estate authority (Photo by Stephan Uttom)

It’s been more than a century since the Kanda tribe left its ancestral home in the Indian state of Odisha in search of a better life and settled in Sreemangal, a tea plantation hub in Moulvibazar district, about 213 kilometers northeast of Dhaka.

The tea industry, started by the British in the mid-nineteenth century, grew through the sweat and toil of tribal people like the Kandas. But in recent decades, the tribe has carved out an independent existence, cultivating its own plantations and gaining moderate success though the farming of lemons, pineapples and guavas.

Now, however, tribal people find their way of life under threat once more.

For the past 10 years, Catholic Kandas and Hindu-majority Tanti communities have been at loggerheads with the Syed Tea and Land Company Ltd, which has sought to expand its Julekha Nangar tea estate by forcibly evicting hundreds of families. In recent months, the situation has escalated. Mobs of armed men deployed by the company have vandalized homes and destroyed crops on multiple occasions, in the hope of forcing tribal villagers from the land.

Like other tribal people, Kanda relies only on the plantation for a living and the damage has left him penniless.

“Without assistance from the government and other benevolent people, we will die starving and this is what the tea estate people want to see happen to us,” he said.

Bikram Tanti, 55, a Hindu father of five said he legally purchased 1.8 hectares of land including his homestead.

“I refused to sell the land, so [the company] came in and destroyed my lemon and pineapple plantation worth nine million taka. I have lost everything because of their greed,” he said.

Kiron Rozario, a Bengali Catholic and development worker, alleged that the tea company has paid the local administration, politicians and police for their support.

“The company is using financial and political influence to fulfill its target. We have helped tribal people to resist the move for years, but the wind is stronger on the other side,” said Rozario, who has worked in the area since 1997.

Officials at Sreemangal police station refused talk to ucanews.com. An officer who refused to give his name said that they have instructions from higher authorities not to speak to the media while the case is ongoing in court.

Syeda Gulshanara, owner of the tea company, said the entire estate, including the Lakhaichhera punji (tea estate village) where the villagers live, has been a leased property of the government since independence from Pakistan in 1971.

“We have generously allowed tribals to reside and cultivate the land, but it is frustrating that they claim it as their own. Our men didn’t destroy their homes and crops, but some damage was done while they tried to clean up the area for the estate expansion,” she told ucanews.com by phone.

She alleged that tribals attacked her men with weapons and three of them were seriously injured.

“If we expand the estate, it will create employment opportunities for tribals, but they don’t understand,” she said.

The tribals in Lakhaichhera are not the only eviction victims. About 500 tribal Khasia people at Jhimai punji in Kulauara area near Sreemangal are also facing threats to their survival.

Like the Kandas, about 80 Khasia families have lived in Jhimai punji of the Jhimai tea estate after migrating to the area from the Indian state Meghalaya during British rule. Traditionally, Khasias, a matrilineal Mongoloid tribe, rely on the cultivation of betel leaves to earn a living.

Since 2012, the tea estate owners have banned tribals from using motor vehicles on a vital road that runs between the estate and the punji. Recently, the authorities ordered tribal people not to use the road even for walking. Tribals have since protested the move to no avail.

“My mother is sick and she needs to be taken to town for treatment from time to time. As we are not allowed to use vehicles on the road, we carry her in a basket. This is so inhuman and disappointing,” said Minbui, 28, a Khasia woman who uses only one name.

In December, the company along with the support of forestry officials, marked 4,000 large trees — most of them used by tribals for betel leaf cultivation — to be cleared for an unknown reason, prompting an outcry from tribals and environmental groups. “Betel leaves are the only source of living for Khasia people and if the trees are cut down, they will become penniless. Moreover, the felling of so many trees will have a disastrous impact on the village — soil will slide down and make the place unlivable for people,” said Abdul Karim, an environmentalist with the local unit of the Bangladesh Poribesh Andolon, a leading conservation group.

“The felling of those trees will also cause massive damage to natural biodiversity. We have been staging protest rallies to stop it, but we have not succeeded yet,” he said.

Minbui said 400 trees in their 1,000-tree plantation have been marked for cutting, meaning that their family will experience a heavy financial loss.

“If they cut down these large trees, many smaller trees will also be damaged,” she said. She noted that some marked trees are just a few meters from her home and that cutting them down could cause damage to the structure.

Uilbon Surong, 37, a mother of four, said the loss of trees will turn her into a “beggar”.

“If there is no income, I can’t feed my children and can’t send them to school. A few years ago, a punji near ours was cleared for a tea estate expansion and it seems we are going to experience the same fate,” she said.

Mohammad Sazzaduzzaman, a deputy conservator of forests in Moulvibazar district, says the tribal people are not legal owners of the land but also insisted that the government won’t do anything that will be harmful to the environment.

“Tribals cannot claim the land because they didn’t buy it, but the government has allowed them to live there out of generosity. Moreover, we will ensure preservation of the environment and we have allowed the felling of the trees keeping that in mind,” he said.

Jhimai tea estate manager Anisuzzaman says the property belongs to the company and it can do anything to protect the interests of the leased property.

“We are legally right with the steps we have taken for the sake of protecting our business. We can cut down trees and put restrictions on using our road if we feel it necessary for the estate,” he said.

He alleged that the tribals have destroyed many trees planted by the owners and killed many wild animals over many years. “For years, they and some missionaries have paid officials to keep their mouths shut about the issue.”

There are 166 tea estates in Bangladesh including 133 in northeastern Sylhet division that covers four tea estate districts. There are about 700,000 tribal people belonging to more than a dozen tribals groups in about 100 punjis in Sylhet. Most of the tribals are Hindus and some are Christians; the majority of them rely on low-paid jobs in the tea industry but some tribals like the Kandas and Khasias rely on agriculture for a living.

Most tribal villagers have settled in various punjis since British rule with verbal permission from the government, living an impoverished, uncertain life. Over the years, many tribals in Sylhet have faced abuse and a number have been made homeless by opportunist tea estate owners and forest officials.

“Most tribal people are simple and poorly educated. They don’t have money and they are unaware about critical legal issues. It makes them easy targets of so-called development plans,” said Oblates of Mary Immaculate Father Joseph Gomes, who has worked for the rights of tribal people in Sylhet over the past 25 years.

“Since 1947, more than 15 punjis have been merged with tea estates and hundreds of tribals evicted. More than 3,500 cases have been filed against tribal people in order to threaten them not to resist these activities. With few exceptions, police usually don’t want to file cases in favor of the tribals,” the priest said.

Human rights activist Rosaline Costa says tribal people face constant threats to their survival because of anti-tribal segments in society and the state.

“The rights of tribal people are frequently violated because some influential people in society don’t consider them an integral part of society and equal citizens. Unless their mindset changes, the situation for tribal people is not going to change,” she said.