As Myanmar elections near, a struggle to get the word out

In remote ethnic areas, few know about the upcoming vote 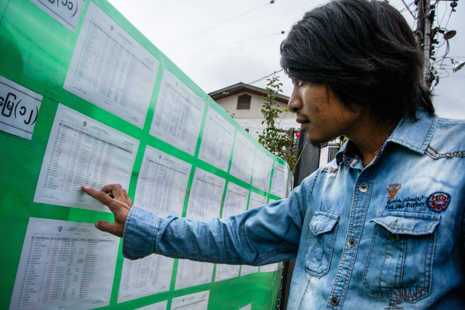 A man checks for his name on a list of voters in Taunggyi, in Myanmar's southern Shan State. (Photo by Simon Lewis)

Long Tway village is a long way from anywhere.

The nearest city, Taunggyi, is a rough three-hour drive to the west of this small settlement of about 30 households, sitting high in a steep valley amid the vast Shan Hills in eastern Myanmar.

In lowland areas of the country and the urban centers, anticipation is rising ahead of elections scheduled for Nov. 8. More than 6,000 candidates have applied to take part in the elections, and campaigning is likely to involve large-scale rallies and poster campaigns.

But here in the hills, people have only a vague knowledge of the polls.

“No one came here to tell us about the election,” local woman Nan Yon, 44, told ucanews.com recently. She had heard an election was coming, she said, but was surprised to learn that the vote was only months away.

The area is outside of the reach of government services. According to locals, authorities only show up to cut down illegal opium poppies — one of the area’s main crops. They say officials are afraid to come here because of the presence of the Shan State Army, an ethnic armed group, in the area.

“We just know there’s an election this year and we will vote,” Nan Yon said. “The government can’t come here, so we don’t know much about it.”

Across Myanmar’s mountainous periphery, according to locals and observers, many people remain uninformed about their rights as voters. This poses a major challenge to a country inexperienced in holding participatory elections. Many of the country’s Christians live in the ethnic border regions, where the opposition, led by Aung San Suu Kyi, will have to compete with popular ethnic minority parties as well as the ruling military-backed party.

A challenge of motivation

An effort by the Union Election Commission to have voter lists displayed so that potential voters can check their names has been underway since June. Long Tway villagers believe their names are displayed in a lower lying village, about an hour’s walk away.

“I don’t know if my name is included or not. Not everyone can afford [to take the time] to go down to check themselves,” said Nan Yon. She is also unable to read Burmese, she said, so puts her trust in the village chief to check that she is listed, as well as to tell her when to vote.

Daw Nan Mo Mo Thidar, president of a network of civil society groups in southern Shan state, said that greater voter education efforts were needed to make sure everyone is eligible and informed enough to take part in the elections.

“Participation is a big problem,” she said. “They don’t know that voting is their right. We have to tell people this.” The U.S.-based Carter Center, which is monitoring the elections, released a report Wednesday saying that, at a local level, there is still “very little knowledge, and minimal information available, about the electoral process”.

“Decisions that can have a major effect on the content of voter education programs are still being made, such as the recent decision to use indelible ink to mark voters’ fingers,” the report said.

“Lack of clarity around advance voting, polling procedures, and election disputes make it difficult to develop voter education content. Voter education efforts can only begin in earnest once the [election commission] releases the procedures and instructions.”

The Carter Center report noted, however, that nongovernmental groups and religious organizations, including churches, were already playing a leading role in getting out the message.

“In Kachin state, religious leaders appear to play a strong role in promoting political participation, though sometimes with a bias toward ethnic party interests,” the report said.

“Church premises are being used to promote voter education initiatives and spread election-related information, and are likely to be used for more explicit political party messaging once the campaign period begins.”

But this is not the case everywhere, the report said, adding that in Chin state, “church leaders expressed reluctance to play a political role, despite their wide-ranging influence”.

The Catholic Bishops’ Conference has urged the country’s priests to give guidance to the faithful that they should look to vote for candidates who will work for the country.

Saw Shwe Lin, general secretary of the Myanmar Council of Churches, told ucanews.com that the organization had no nationwide voter education program, but was coordinating with some civil society groups on voter education. Protestant churches had also been urging their followers to check voter lists, he said.

Ko Nay Myo, an activist in Taunggyi with the group 88 Generation Peace and Open Society, said the local branch of the election commission had met with local civil society groups and encouraged them to go out to the villages and educate voters. But efforts from the election commission itself were limited to distributing vinyl posters and pamphlets, he said.

However, while civil society groups were working hard to reach remote areas, he said, apathy about the poll is widespread given the country’s history of military rule, which undermined democratic movements while failing to provide basic protections to the people.

“There is low interest among the people for the election. They think if their name is not included on the voter list, that means they aren’t supposed to go and vote,” he said.

“Most people’s attitude is: ‘Whoever governs the country, we will still have to look after ourselves anyway.’”