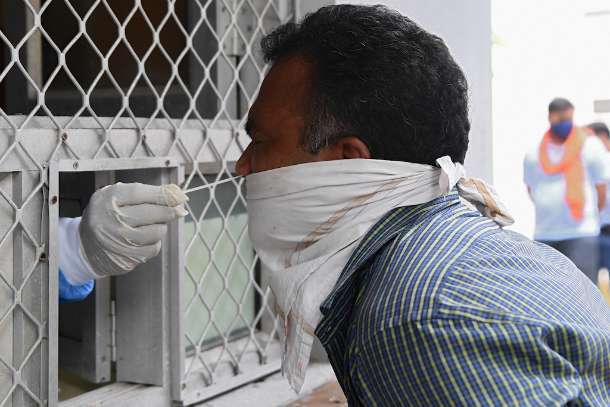 A medical worker collects a swab sample from a man for a coronavirus test at a government health center in New Delhi on Sept. 16 after India's total of Covid-19 cases passed five million. (Photo: AFP)

Besides Hindutva’s controversial politics and effective propaganda keeping most Indian voters emotional, it is also true that the Modi regime has been able to keep its detractors at bay with a slew of media management strategies and headline management in electronic social media.

India's Covid-19 tally has seen a quantum leap. On Sept. 16, the country had reported 5,020,359 cases and 82,091 deaths, according to World Health Organization statistics. Only the United States has had more cases.

More than 1,100 people died of the novel coronavirus in the 24 hours between Sept. 13 and 14, Indian officials said.

On Sept. 14, Congress leader Rahul Gandhi mocked it by saying: "India's coronavirus-affected figures will touch about 50 lakh [5 million] but it will be citizens’ responsibility to save one's life 'yourself' because the PM is busy with peacocks."

Many Indians are astonished that the coronavirus crisis, compounded with an economic slowdown and joblessness, is perhaps not yet the biggest challenge threatening Modi’s leadership.

In contrast, Modi has used the crisis to reinforce his political position and offer himself to the people as a strong Hindu leader in a country with about one billion Hindus in a population of 1.35 billion.

The ruling Bharatiya Janata Party (BJP) and the federal government's spin doctors are hyperactive in claiming a positive performance for the government. And what suits the official gambit is that there is still no big challenge to Modi from opposition parties despite the challenges facing the government.

Modi's calculated gamble in playing his time-tested pro-Hindutva and often anti-Muslim cards has only endeared him to Hindu voters.

In the 2014 parliamentary polls, his party won 272 members but in the 2019 general election the tally jumped to 303, giving Modi and his party a comfortable majority in the 543-member lower house. Health Minister Harsh Vardhan told the lower house on Sept. 14 that the coronavirus fatality rate was quite low at 1.67 percent.

Of course, the official data underreports the immense number of deaths due to Covid-19 and does not show deaths and injuries — people's agony — from the negligence of health staff.

As reported by UCA News, more than 60 pregnant mothers and 871 newborn babies died in Meghalaya state after expectant mothers, especially from quarantine zones, were denied admission to hospitals.

Vardhan said 77.65 percent of Covid cases had been reported as recovered. He also took pride in Modi’s announcement of a national lockdown in March that put the economy in the doldrums.

"The government of India undertook the Covid-19 challenge with the highest level of political commitment. The nationwide lockdown was a bold decision … and the step successfully blunted the aggressive progression of Covid. It has been estimated that this decision prevented … 37,000 to 78,000 deaths," Vardhan said.

Nevertheless, the pandemic and the lockdown damaged the economy heavily. The economy shrank by 23.9 percent in the three months to the end of June, the worst nosedive since the mid-90s.

In early August, India became the third country in the world to pass two million cases. But the figures have spiked rapidly in the last 40 days or so.

Even though the government failed to provide concrete and convincing answers to fight the pandemic, some of the Modi regime's worst critics would admit that things have been managed well. "It has been a kind of good headline and social media management," said Congress leader Ilyas Qureshi from Gujarat.

Team Modi understands that beyond a point there could be limitations to the Hindutva agenda. One BJP insider said it is well known that people can be led by an emotive agenda and even made to agree for a collective self-sacrifice but "only for a brief spell."

The joblessness, poor health infrastructure and negligence of health staff during the pandemic will create tension and lead the faceless people — poor, middle class and marginal sections — towards a point of mass protest and anguish.

So, is India heading for a political backlash and a civil war-like situation because of the chaos of the last few months?

Somehow, Modi and the BJP are not yet the target of people's tirades, although strong protests against the discriminatory citizenship law in December and January almost brought the government to its knees.

It is not clear who will face the political backlash for Covid-19 mismanagement. Powerful sections of the media and ruling establishment favor non-Covid debates on television and social media.

The Hindutva agenda and discriminatory behavior towards Muslims or even Christians highlight a particular group as enemies of the people.

Hence new enemies now are being created, says Qureshi. A few TV channels, according to him, are working overtime on stories about drug money in the film world and about the mysterious death of Hindi film star Sushant Singh Rajput. "But there is no discussion of Covid-19 and thousands of people going jobless in various social strata,” he adds.

The federal agencies and other tools of the BJP are already in action. Several film stars are being questioned or will be questioned in Mumbai and Bengaluru about the drug menace.

Some of these allegations about a drug cartel in the film world could be true. But it is also true that these issues provide a breather for the Modi government and divert the focus from Covid and related crises like joblessness.

However, according to Muslim lawmaker Asaduddin Owaisi from Hyderabad, things cannot be swept under the carpet any longer. He was referring to the fact that as many as 17 elected members of parliament tested positive for coronavirus on Sept. 14 before attending the new parliamentary session.

Congress MP Adhir Ranjan Chowdhury accused the government of trying to avoid “answering uncomfortable questions” and therefore decided to hold the parliamentary session but without the mandatory Question Hour.

"Question Hour is the essence of parliamentary democracy. It means making the executive that is the government answerable," he said.

Supriya Sule, a lawmaker from the Nationalist Congress Party in Maharashtra, said: "I think the biggest challenge right now is the state of the economy and unemployment. I do understand that we are not the only country going through it. I do not see this government at the center talking extensively either about the economy or unemployment challenges."