Centuries-old coins and newspapers were found in a time capsule discovered during renovation work at the Cathedral of the Good Shepherd in Singapore in 2016. (Photo: Jared Ng/Catholic News)

A time capsule found beneath the Cathedral of the Good Shepherd in Singapore five years ago contains 18th and 19th century artifacts that preserve pieces of history of the city-state.

The Archdiocese of Singapore remembered the great discovery with a Facebook post that drew hundreds of likes, comments and shares.

“In 2016, midway through a $38 million restoration of the Cathedral of the Good Shepherd, the contractors discovered a time capsule buried some 173 years before. The shoebox-sized pit it was found in was under a column base on a series of granite steps along the cathedral's Victoria Street facade,” said the post dated Aug. 25.

“It was sealed by a cornerstone and contained 18th and 19th-century artifacts such as 24 British, French and Spanish coins, a copy of the Singapore Free Press, the Straits Messenger, the Bengal Catholic Herald, the Madras Catholic Expositor and a religious service booklet. The rare historical artifacts are now displayed at the cathedral’s heritage gallery.”

Netizens have expressed joy on social media over the invaluable artifacts.

The artifacts included a painting of French MEP missionary St. Laurent Imbert, who visited Singapore in 1821

The discovery made quite a buzz in Singapore and beyond, making headlines in local and international press.

The Catholic News of Singapore Archdiocese reported on June 29, 2016, that workers carrying out restoration work on the cathedral discovered the cornerstone and the time capsule.

The June 22, 1843, edition of the Singapore Free Press recorded that French Bishop Jean-Paul-Hilaire-Michel Courvezy of the Paris Foreign Missions Society (MEP) had presided over the cornerstone-laying ceremony of Singapore’s oldest Catholic church.

Among those present were MEP priest Father Jean-Marie Beurel and John Connolly, a merchant who offered great financial support to the building of the church, according to Catholic News. 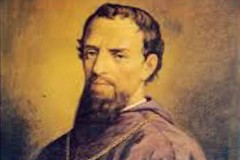 The artifacts included a painting of French MEP missionary St. Laurent Imbert, who visited Singapore in 1821, which marked the official beginning of the Catholic Church in the country. Father Imbert later went to serve in Korea as a bishop and was martyred on Sept. 21, 1839.

The name of the Cathedral of Good Shepherd has its origins in a note of St. Imbert to follow missionaries where he wrote: “In desperate circumstances, the Good Shepherd lays down His Life for His Sheep.”

The Singapore Church started year-long celebrations of the 200th anniversary of the advent of Catholicism in the country on Dec. 13, 2020, that will end on Dec. 11 this year.

The theme for the jubilee year is “Ignite and Shine with Faith” in line with the pastoral vision of the Archdiocese of Singapore. Although curtailed due to Covid-19, the jubilee events focus on renewing the faith of the Catholic community through four aspects: deepen, discern, witness and celebrate.

With a population of about 5.6 million, Singapore is a multi-ethnic and multi-religious country. Most Chinese are Buddhists and most Malays are Muslims. Christians comprise about 15 percent of the population.