Article in bad faith: The plight of Sri Lanka's minorities Present-day Sri Lanka points to the active presence of the four major religions as a positive sign of reconciliation in the country. But it must also be acknowledged that the religious scene is dominated by Buddhists (70 percent), followed some distance behind by Hindus (12 percent,) Muslims (9.6 percent) and Christians (7.6 percent.)

Article No. 9 of the Sri Lankan constitution awards preeminence to Buddhism. The fact it also declares tolerance for those of other faiths is all very well and good in theory but in reality the article produces inequality for a great many people.

Although some non-Buddhist leaders speak in favor of this article, there are repercussions for them too because non-Buddhists do not enjoy equal access to job opportunities, nor to positions of political power. Minorities are minorities and must remain so forever and ever.

I would therefore like to pose these questions to Sri Lanka’s Buddhist leaders:

Apart from these major religions Sri Lanka has several other minority groups in the background who lead conspicuously subservient lives under the thumb of the majority. They cannot obtain jobs they are rightfully qualified for; this applies to Hindus Muslims and Christians, who face discrimination in employment.

Sometimes those with extreme views create difficulties for minority groups by ostracizing them from mainstream establishments. For example, women in Islamic religions don’t have the same freedom as their male counterparts and are at the beck and call of dominant males. They are also forced to accept the dress code laid down by the authorities. There is, at least, some discussion about changing the marriage customs to bring some relief to those persecuted within the Muslim community.

Christians are divided between Catholics and other members of the National Christian Council. Catholics might be a majority when compared with the other established Churches and evangelical Christians — but they are still a significant minority in relation to the other major faiths.

Many discriminated Christians from the evangelical churches are given no opportunity to even discuss violations by the majority Catholic Church. When they do, they are categorized as agents of the devil and no attempt is ever made to even address their opinions.

The more open-minded stance exhibited by Pope Francis from the first days of his papacy is not supported by the faithful in our country. The lack of openness on the part of Catholics toward these evangelical Christians betrays the fact that they oppose the proclamations of the Vatican II Council. 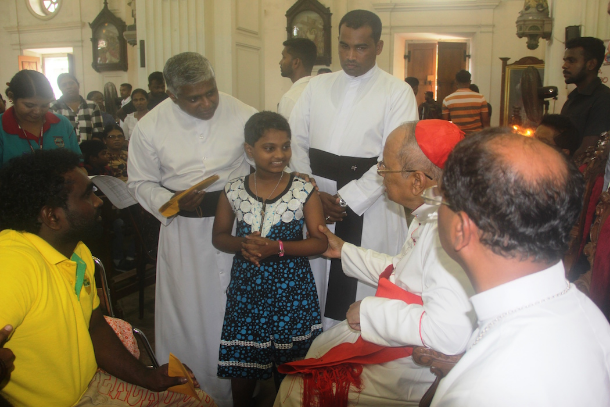 There are extremist groups within all religions and many politically affiliated people seek benefits from powerful leaders at the expense of the poor and voiceless.

Sri Lanka also has castes, whether organized as such or not, and they don’t enjoy equality of rights. In India casteless groups and low-caste people have begun asserting themselves and now have people in positions of authority as a result. Their action has produced results.

It is not so in our case. In Sri Lanka, members of minority groups and low-caste leaders cannot climb up the ladder, whether in politics or in the business world. The castes are only mentioned in terms of arranged marriages and discrimination against them is only conducted secretly, so that it cannot be proved.

Regarding people’s nationalities based on ethnicity, the Sinhalese are dominant with more than 72 percent, Tamils 12 percent, Muslims 11 percent and the remaining 5 percent in various categorized groups. Among them there are some who belong to major ethnic groups but are ostracized due to their birth, or linguistic differences or interpretation of religious teachings.

There is a further division among Christians and Catholic because they believe in different dogmas of faith due to their own interpretations of the same Scripture. They do not create formal lines and have no serious dialogue with each other, even on common issues. Some of the minority groups are even victimized by external, majority groups.

Evangelical Christians face persecutions, too, not only by the government but by their own internal groups, regarding marriages, funerals and school admissions etc.

Among Hindus, external factors like caste divisions create dissension that affects their sociopolitical life, while Islamic religious people also have various groups — Sunni, Shi‘hite, Wahabis, Salamists to name a few — and they do not see eye to eye.

The majority adherents are Buddhists and they have various Nikayas (collections of work) based on the caste system that is prevalent among them.

So we can see that many people’s social life is affected by these man-made divisions.

Voting in elections is today based on the issues of concern to the majority, for example Sinhala versus Tamils, and with clear-cut restrictions:

Two or three groups seem to have emerged as influential in the forthcoming presidential elections. Over the next 100 days we will see that many of the minorities are living in fear of the outcome. Since their wishes has simply been absorbed into the promises of the main candidates they are not sure whether their problems will be addressed.

In post-civil war Sri Lanka the expected candidates have not spoken of winning the minority groups equal rights to Tamils. Their land, for example, is still occupied by the armed forces and not returned to the original owners.

Even though some political leaders speak of transitional justice, the major candidates are still not prepared to ensure justice for the victims of the war. The same could be seen in the aftermath of the Easter tragedy on April 21.

Religious leaders in various groups also seem to be silent on the issues of justice within the major minority Tamils or seem to have given their support indirectly to one political party or another.

In the recent past tea plantation workers demanded a daily wage of Rs 1,000 (US $6) only one Catholic Bishop and very few priests came out in sympathy. Other Catholic bishops in the plantation areas were silent — was this because they receive monthly tithes from these poor workers? Other religious leaders were also silent, not wanting to upset the applecart.

Regarding refugees, even though they were small in number, mostly from Asian countries, religious leaders were again silent and appeared to give the impression of dodging the issue.

In the aftermath of the April 21 carnage some Muslim shops and houses were burned on May 13. The media said nothing and the boycotting of Muslim businesses was not discussed by any Christian bishop or church head. Buddhist and Hindu leaders also failed to voice their sentiments regarding discrimination against Muslim traders.

Minorities from all groups will be hoping that at this year’s elections the citizens of the county as well as the candidates will open their eyes to the injustices that abound, that the exploitation of the poor in economic activities will be addressed and their ears will be open to the cry of these voiceless people.

Father Reid Shelton Fernando is a prominent human rights defender, university lecturer and chaplain of the Young Christian Workers Movement of the archdiocese. He is well known in Sri Lanka for his writings and commentaries on social and political issues.