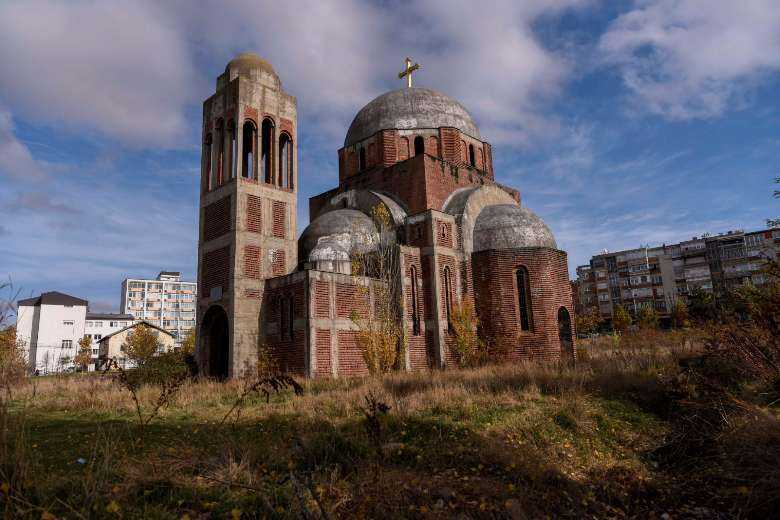 The unfinished Orthodox church of Pristina is pictured on November 10, 2021. (Photo: AFP)

At first glance, the half-built Orthodox church in the heart of Kosovo's capital seems little more than a napping spot for stray dogs splayed out in a patch of unkempt weeds near the padlocked entrance.

But for nearly three decades the hulking structure has cast a long shadow over Pristina, serving as a potent symbol of the unresolved dispute between Kosovo and Serbia.

"This church must be destroyed," Jahir Islami, a 77-year-old retiree, tells AFP, citing painful memories of Kosovo's bloody past when the land was divided along ethnic lines during years of violent unrest.

Disputes over religious sites remain simmering flashpoints between the bitter rivals since Kosovo declared independence in 2008 -- with Serbia still refusing to acknowledge the breakaway province's sovereignty.

Kosovo is home to some of the Serbian Orthodox Church's most revered monasteries, with many of the centuries-old churches now residing in largely ethnic Albanian towns where Islam predominates.

The fate of those churches and Kosovo's shrinking Serb minority has continued to thwart efforts to reach a deal between the two sides that have achieved little progress in recent years.

Unlike the storied Orthodox monasteries in the countryside, the unfinished church in Pristina belongs to a more recent and brutal history.

Former Serbian strongman Slobodan Milosevic facilitated its construction in the mainly Albanian city during a bloody crackdown on the community in Kosovo, which led to a brief but vicious war in the late 1990s that only ended after NATO intervention.

"They did not only commit crimes against our bodies but also wanted to erase our history, to attack our identity, to implement their project of ethnic cleansing of Kosovo," Hajrulla Ceku, Kosovo's minister of culture, tells AFP.

Kosovo officials have long accused Belgrade of using the Orthodox Church as a proxy, with the clergy acting as emissaries on the ground carrying out Serbia's will.

Tensions have been steadily rising over the future status of Kosovo's Orthodox churches since the election of Prime Minister Albin Kurti in 2021.

The left-wing leader has since called for four Serbian Orthodox churches to be taken off the UNESCO World Heritage in Danger list.

The churches were listed as endangered following rioting in 2004 that saw mobs target Orthodox sites after unfounded rumours about Serbs murdering Albanian children sparked days of fighting that killed at least 19 people.

For years, NATO troops were positioned outside most of Kosovo's Orthodox establishments to prevent further violence.

But since then, religiously motivated attacks have declined, with NATO troops only guarding the picturesque Visoki Decani Monastery in western Kosovo.

"This is a very important indication that the situation is much better than in the past," said former NATO commander in Kosovo Franco Federici.

Other churches are guarded by special units made up of Kosovo police, but some establishments have no security at all.

The progress, argues the Kosovo government, also supports their calls to be recognised by the UN as the sovereign party responsible for the four listed churches, instead of Serbia.

Serbian Orthodox officials refused to comment on the matter when contacted by AFP.

But Belgrade has roundly dismissed any such moves to change the status quo.

"They want to present Kosovo as an oasis of peace and Pristina as needing to look after and protect Serbian cultural treasures," said Petar Petkovic, the head of Serbia's office for Kosovo.

"It's a hypocritical act by Pristina and an attempt to deceive the international community," he added, saying more than 135 churches and monasteries have been destroyed since 1999.

Similar claims have been made on the Albanian side, who say more than 200 mosques were damaged or destroyed by Serb forces amid bouts of ethnic cleansing.

But even as Kosovo officials point to a drop in recent violence, hostilities are again rising in Pristina.

In June, members of the Serbian Orthodox Church held a rare liturgy service inside the unfinished church, triggering protests and vandalism including the scrawling of graffiti saying: "Jesus hates Serbs".

The church's future is being hashed out in the courts following years of litigation between Orthodox officials and the University of Pristina, where the structure resides.

Even as tensions flare again, many residents in Pristina say they do not want the church to be demolished but rather to serve as a memorial to help remember Kosovo's troubled past.

"Perhaps this facility can be transformed into a cultural facility and help to build trust between Albanians and Serbs," says Nexhmi Statovci, a 66-year-old retiree.

"Let's not ruin it but use it for positive rather than negative things."