The arrests are part of an intensified crackdown that aims to eliminate the underground church in China, Catholics say 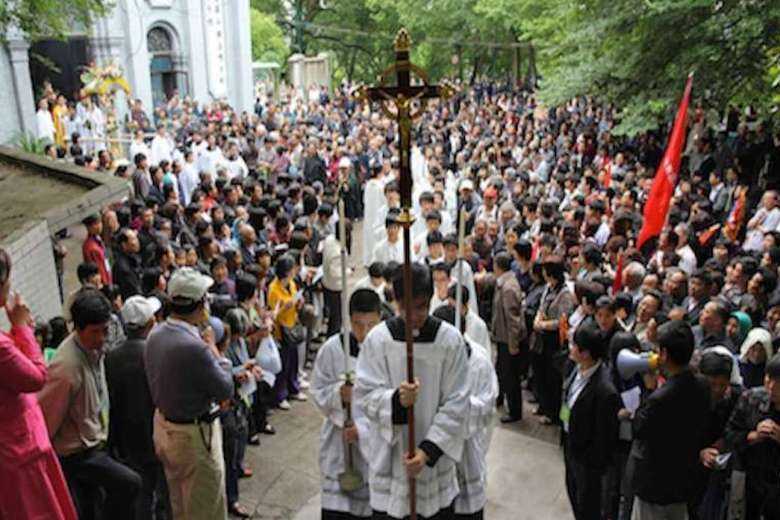 A Marian procession at the shrine dedicated to Our Lady of Sheshan near Shanghai in China.

Two months since Chinese police arrested a Vatican-approved bishop, 10 priests and an unspecified number of seminarians for violation of religious rules, their fate and location remain unknown, prompting a Christian rights group to express concerns about their safety.

Bishop Joseph Zhang Weizhu of Xinxiang in Henan province was arrested on May 21, a day after police detained the priests and seminarians for allegedly violating the country’s repressive new regulations on religious affairs.

The arrests came after the diocese decided to use an abandoned factory building as a seminary and assigned priests for religious formation, media reports claimed.

International Christian Concern (ICC), a US-based Christian group monitoring persecution of Christians across the globe, issued a statement on July 16 calling for the release of the bishop, priests and seminarians.

Earlier, ICC reported that those arrested were subjected to “political lessons” that are brainwashing sessions designed to inculcate the principles of religious freedom granted by the Chinese Communist Party (CCP).

Bishop Zhang, 63, has been leading the diocese since 1991 following his secret ordination but he faced constant pressure from Chinese authorities and was barred from observing duties as a bishop.

The diocese, created by the Vatican in 1945, was never recognized by the state-aligned Bishops’ Conference of the Catholic Church in China (BCCCC) and the Chinese Catholic Patriotic Association (CCPA).

Dioceses headed by Vatican-approved bishops are part of the underground church.

In September 2018, the Vatican-China agreement was signed for two years with an aim to unify the Catholic Church in China with the global church. It was renewed for another two years in 2020 but there has been an increase in persecution against the underground church, local Catholics say.

The renewed clampdown aims to end the underground church by criminalizing and arresting its clergy as they work outside state-approved church bodies, they claim. This year Open Doors, an international Christian charity, ranked China among the 20 countries where Christians face the most severe forms of persecution.

However, Bishop Zhang and Xinxiang Diocese were not recognized by Chinese authorities.

Media reported that Bishop Zhang was arrested on several occasions for alleged violation of rules but was later released. However, he was not allowed to oversee finances and resources of the diocese. In 2010, the government appointed an administrator to run the diocese who reports directly to state authorities.

The arrests came less than a year after authorities in Xinxiang shut down Catholic schools and kindergartens in line with the CCP’s ban on education by religious groups.

The repressive new regulations on religious affairs, which came into effect in May, state that Catholic bishops must be approved and ordained by the state-sanctioned Chinese Catholic Bishops' Conference.

It also requires that clergy must support the leadership of the CCP and must regularly apply for recertification to carry out their duties. Clergy are allowed to run religious activities, including seminaries, only in government-registered and controlled institutions.

The arrests in Xinxiang have triggered shock and condemnation from across the world.

“May God give you the strength to stand in trial. May your situation quickly return to normal and worthy of the greatness of your country,” Archbishop Eric de Moulins-Beaufort of Reims, president of the French bishops’ conference, said in a statement.

The prelate extended Bishop Zhang and his confreres “the fraternal greetings of the Catholics of France” and strongly denounced the imprisonment as “a particularly harsh and unjust test.”

“While in previous years the communist authorities tolerated clerics who were not officially recognised by the communist government, they are now increasingly clamping down on them. Since the new decree came into force on May 1, priests who were members of the Chinese underground church are under great pressure to register with the official, state-recognized patriotic church,” she told KNA, Germany’s Catholic news agency.