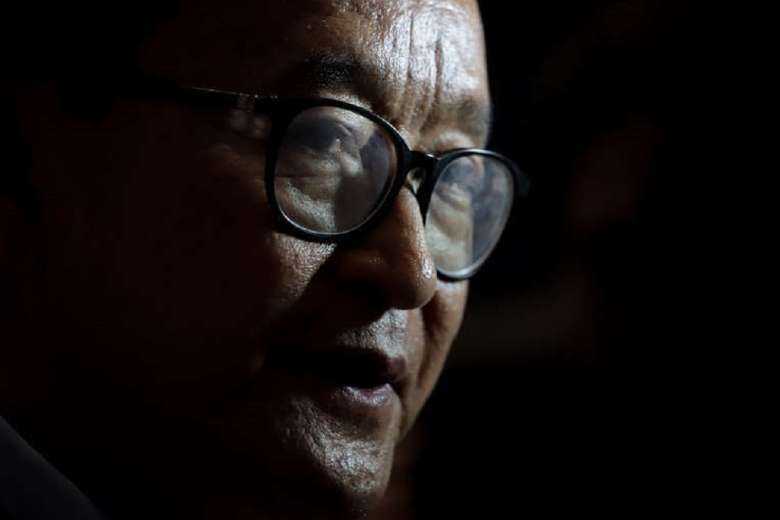 Sam Rainsy speaks to the media as he arrives at Kuala Lumpur International Airport on Nov. 9, 2019. The Cambodian opposition leader lives in exile in French capital Paris, from where he has persistently called for a popular uprising to oust Prime Minister Hun Sen. (Photo: AFP)

An investigating judge has issued an arrest warrant for the leader of the Cambodia National Rescue Party (CNRP) for violating a lockdown by calling on people to revolt against stringent health measures aimed at curbing the Covid-19 pandemic.

Justice Ministry spokesperson Kim Santepheap said the arrest warrant was issued following a complaint filed by the General Commissariat of National Police after Sam Rainsy posted a video on his Facebook page on April 24 calling on people to revolt against the lockdown measures.

He also urged people not to follow “the incitement made by convict Sam Rainsy” while speaking at a press conference announcing a seven-day extension of the lockdowns in Phnom Penh and nearby Tak Mao following the third community outbreak known as the February 20 Event.

Sam Rainsy lives in exile in French capital Paris, from where he has persistently called for a popular uprising to oust Prime Minister Hun Sen. More than 100 of his supporters have been detained and charged with incitement over the last 16 months.

Cambodia has witnessed a dramatic surge in Covid-19 cases ever since two Chinese women bribed their way out of quarantine and went partying with friends on Feb. 20. As a result, fines and stiff jail terms have been imposed for people convicted of violating health rules.

Without cooperation from our people, it's hard for us to succeed

Late on April 28, the government also announced a record single-day high of 698 confirmed Covid-19 cases, taking the total tally to 11,761.

Quoting sources, The Khmer Times says the April 29 tally is expected to reach 800.

Nearly all those cases and all 89 deaths have been recorded since Feb. 20 and were the UK variant. Vietnamese authorities say they have also detected the South African variant in Cambodians who had crossed their border and tested positive.

Meanwhile, the Health Ministry announced a further 400,000 doses of the Sinopharm vaccine had arrived from China, which has so far donated 1.7 million doses. Cambodia has also received 324,000 doses of AstraZeneca/SII (Covishield) via the Covax facility.

Cambodia’s vaccination rollout has outperformed neighbors Thailand and Laos, inoculating 1.3 million people against the disease. However, food distribution is an issue amid reports of shortages and price gouging.

“I want to stress that if the 14-day period is over but the situation does not ease, I will extend the lockdown of Phnom Penh, Tak Mao and some other provinces where necessary. Without cooperation from our people, it's hard for us to succeed,” Hun Sen said shortly before announcing a lockdown extension.

“So, I reiterate that this lockdown will forbid people from leaving their homes, except for some cases.”

Many people are relying on charity. The Phnom Penh Post reported that King Norodom Sihamoni and Queen Mother Norodom Monineath Sihanouk had donated 105 tonnes of rice, 4,300 boxes of noodles, 4,300 boxes of canned fish, 650 cases of drinking water and 12,000 face masks to the Phnom Penh Municipal Hall to relieve the people living in red zones, where the harshest lockdown measures are imposed.