Province not at peace despite what President Joko claims, rebel group says 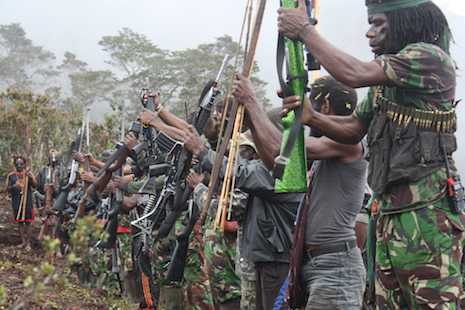 By Banjir Ambarita for the Jakarta Globe

Armed separatists in Indonesia’s Papua province have declared open war on the military and non-Papuan civilians, insisting that their decades-long struggle for independence is not over and denouncing as a lie President Joko Widodo’s reassurances that the region is peaceful.

Enden Wanimbo, a commander of the National Liberation Army (TPN) of the Free Papua Organization (OPM), told the Jakarta Globe on Friday that his group was declaring “a total revolutionary war from Sorong to Merauke”, referring to the westernmost and easternmost ends of the region.

“This means all-out war against all Indonesians in the Papuan land,” he said by phone.

Enden, long sought by the Indonesian authorities and believed to be based in Lanny Jaya district, an OPM stronghold, rejected any notion of dialogue with Jakarta, saying that Papuan independence from Indonesia the was at the heart of the group’s demands.

Indonesia annexed the territory, comprising the western half of the island of New Guinea, in 1969, following a ballot now widely considered a sham. The OPM has for decades mounted a low-level armed insurgency against the Indonesian security forces, who are regularly accused by residents and rights activists of a litany of human rights violations in their attempts to quash the insurgency.

President Joko, in a visit to the region earlier this month, said he wanted to tackle perceptions of the region as a conflict zone, and declared it open to foreign journalists for the first time since the annexation.

However, Enden said the impression that Joko was giving to the world about the situation in the region was a lie.

“We want to show that President Jokowi’s statement, that Papua is at peace, is not true,” he said.

Puron Wenda, another OPM commander also based in Lanny Jaya, agreed that the president’s assessment was false.

“The OPM is ready for war. We no longer want any more dialogues that are rigged by Indonesia [...] which likes to cheat us,” he said.

“Indonesia should get out of Papua, because we will continue to fight for an independent Papua,” Puron said.

He said that the group of fighters he led with Enden would attack not just the security forces, but also civilians who were “non-Papuan,” or not ethnic Melanesian.

“Businesspeople, construction workers, civil servants — all Indonesians will be killed, chased out; not just soldiers or police, anyone with straight hair,” he said.

Enden welcomed the foreign press to come to Papua and witness the coming war.

“International reporters and national ones must be free to report the news from Papua,” he said.

There was no immediate response from the military on Friday to the OPM’s declaration of war, which comes just days after police arrested dozens of activists for staging a demonstration in support of de facto recognition of an independent West Papua state by a group of Pacific island nations.

At least 70 members of the West Papua National Committee (KNPB) were arrested during the rally in Jayapura on Wednesday and held for questioning by police, the group’s spokesman Sarpas Mbisikmbk said.

Sarpas said protestors had gathered to show support for the United Liberation Movement for West Papua (ULM), formed late last year by the KNPB, the West Papua National Coalition for Liberation and the Federal Republic of West Papua, to gain full membership in the Melanesian Spearhead Group, an inter-governmental grouping of Melanesian states.

The MSG is expected to decide on the ULM bid for membership in July, and Indonesia has recently stepped up its lobbying of Melanesian states to prevent the proposal succeeding.