Are we in danger of turning the pope into an idol?

"You shall have no other gods before me:" Could we be breaking that commandment? 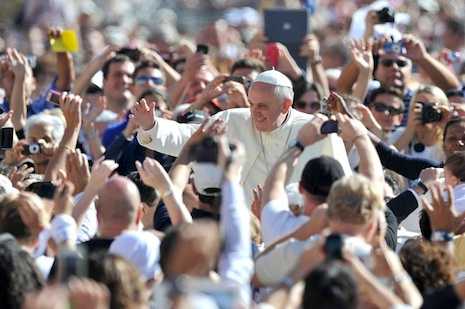 The creation of an idol, Gregory of Nyssa tells us, originates with the inception of an idea —one that we nurture and polish and rationalize until it takes possession of our judgment and guides our actions. Since Eden, and our earliest stories, this has been such a predictable characteristic of our fallen human nature that Madison Avenue, Hollywood, and all political machines depend upon our tendency to accept an idea, make a glittering, self-reflective golden calf of it, raise it aloft, love it and then endow it with power over our lives.

We think of pop stars as “idols” but an idol, more correctly, is the thing or person best capable of delivering an affirmation of ourselves to ourselves. “We are the ones we have been waiting for,” claimed Barack Obama in 2008 and the fainting, adoring crowds could not get enough of the man who once described himself as a “blank screen on which people…project their own views,” because they could not get enough of themselves.

It has only been six months since Jorge Mario Bergoglio came to the world with a new name, but already MSNBC’s Chris Hayes, channeling his inner tween, has gushed, “is it too early to say Francis is the best pope ever?”

His effusion prompts a different question: Are we, like the ancient Jews at Mount Sinai, and Americans in 2008, molding Francis into an image and polishing him to a high gloss, that we might better see ourselves reflected in him? Are we treating him as we would a god?

Full Story:Is the world making an idol of Pope Francis?