South Koreans will give medical supplies, money and management tips Cardinal Andrew Yeom Soo-jung of Seoul presents a scroll bearing the Latin words 'Fraternity in Christ' to Cardinal Philippe Ouedraogo of Ouagadougou on Feb. 5 after an agreement was signed between the two archdioceses. (Photo by Catholic Times of Korea)

The Seoul Archdiocese have agreed to support priests in West Africa in terms of church management, priestly formation and medical equipment.

The archdiocese signed a cooperative mission agreement to this effect with the Ouagadougou Archdiocese in Burkina Faso on Feb. 5

Seoul Archdiocese, which recently joined a solar city project, will provide funding each year to repair old rectories and buildings in Ouagadougou.

It will also support local priests from the Burkino Faso capital who wish to study at Seoul's Catholic University, which it runs.

Seoul Archdiocese will also cover the medical expenses of poor patients who seek treatment at Paul VI Hospital in Ouagadougou, provide medical equipment and health technology, according to the deal, which will be reviewed annually and can be renewed after three years.

Cardinal Yeom traveled to the African archdiocese to ink the agreement.

He was appointed in 2014 at the same time as Cardinal Philippe Ouedraogo of Ouagadougou, who ranks as the first cardinal appointed by Pope Francis. Since then the two cardinals have become friends. 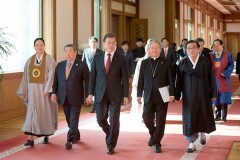