A second collection was taken at St. Patrick's Cathedral and many Catholic churches in Karachi to raise funds to help the victims of a deadly terrorist attack on Bethel Methodist Memorial Church.

At least nine people were killed and 57 wounded when two bombers stormed the packed Christian church in the southwestern Pakistani city of Quetta on Dec. 17 last year.

An Islamic State affiliate group claimed responsibility for the carnage.

In a letter written to Catholic priests, Archbishop Joseph Coutts of Karachi urged the faithful not to forget the attack victims and to contribute generously to support them at this difficult time.

"The loss is beyond our imagination. Looking at the number of deaths and injured and the damage to the church's property, it is difficult to compensate, especially those who lost their loved ones," the archbishop said.

He has already sent 300,000 Pakistani rupees (US$3,000) to the church with a hope that "this little contribution will be helpful for the people in need."

"I came to know that many of the injured are still in trouble and in pain due to the lack of facilities in state-run hospitals. It is saddening and I know it is expensive to get treatment on your own in private hospitals," Archbishop Coutts said.

Pastor Simon Bashir, who is in charge of Bethel Methodist Memorial Church, said it was still looking for help from the government.

"We are going through a tough time. The injured people are in much trouble and many have been moved to other private hospitals in Quetta, Karachi and Multan for better treatment," he said.

"One of our choir members is still under treatment after her intestines were damaged. The bags they are using to help her digestion cost around 1,500 rupees and have to be changed daily. Another choir member's daily expenses are 4,000 rupees due to a leg fracture." 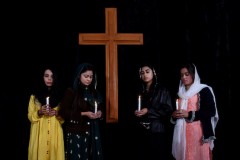