Urges faster reforms and 'true freedom' for the country 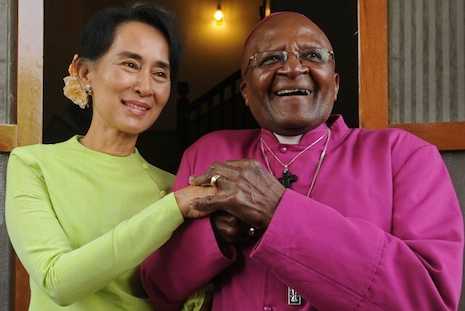 Archbishop Desmond Tutu of South Africa on Tuesday met with Myanmar’s opposition leader Aung San Suu Kyi at her house in Yangon, the first ever meeting between the two Noble Peace Laureates.

Tutu, anti-apartheid campaigner, was an ardent supporter of Suu Kyi and persistently called for her release during her years of house arrest imposed by the country’s military rulers.

Tutu once vowed that he would visit Myanmar when Suu Kyi became the country’s head of state, but his visit came as the Burmese democracy leader, though now elected as a member of parliament, is still struggling to lead the country towards further democratic reforms in the parliamentary system dominated by former and active army generals.

“Personally, this is a very joyful moment for me though I don’t know what his visit means to our country,” Suu Kyi told the press after an hour-long closed-door meeting with Tutu at her lakeside mansion, which was a prison to her for decades.

In a press briefing, Tutu called for speeding up Myanmar’s ongoing political and economic reforms and expressed his hope that the country will enjoy true freedom in the near future. He also met with a group of former political prisoners in Yangon this morning.

In 1984, Tutu received the Noble Peace Prize for his role in the anti-apartheid movement in South Africa and has since become an influential moral voice calling for the end of human rights abuses around the world.

He arrived in Yangon on Monday and is scheduled to give a speech to the Burmese people at the American Center in the former capital and make visits to the country’s major tourist sites including Bagan in central Myanmar.

Ahead of Tutu’s visit, Rohingya parliamentarian Shwe Maung of Arakan state pleaded in a twitter post for Tutu to help resolve ongoing conflicts in western Myanmar, where a series of deadly riots have pitted Buddhist Arakanese and Rohingya communities against each other.