Holy Cross Archbishop Moses Montu Costa of Chittagong has died in hospital in Dhaka on July 13 at the age of 70. (Photo: Stephan Uttom, UCA News)

A leading Bangladeshi Catholic archbishop has died just weeks after apparently recovering from the deadly Covid-19.

Holy Cross Archbishop Moses Montu Costa of southeastern Chittagong Archdiocese, died in a hospital in the Bangladesh capital Dhaka on July 13 after suffering a series of strokes. He was 70.

Archbishop Costa became the most senior Catholic clergyman in the country to die during the coronavirus pandemic.

Archbishop Costa was the secretary-general of the Catholic Bishops’ Conference of Bangladesh (CBCB). He also headed the bishops' Commission for Health Care. Previously, he served as chairman of CBCB Commission for Seminary and Commission for Youth.

Holy Cross Cardinal Patrick D’Rozario of Dhaka Archdiocese and president of the CBCB announced the prelate’s death in a statement and called on everyone to pray for his departed soul.

Archbishop Costa was admitted to hospital on June 13 in critical condition and tested positive for Covid-19 the next day. His condition improved significantly and he tested negative for the virus on June 22. However, he remained in hospital for further treatment.

He suffered multiple strokes on July 9, according to doctors.

He will be buried in Chittagong on July 14, Chittagong Archdiocese officials said. 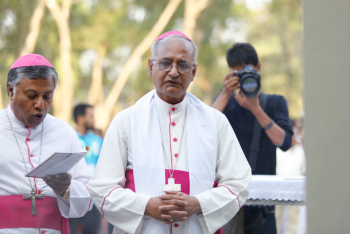 “Besides his extraordinary efforts in laying a strong socio-economic foundation for the Church and revolutionizing the systematic re-organization of Church apparatus, he emphasized a spiritual awakening and missionary zeal for clergy, religious and laity,” he told UCA News.

“He believed that without becoming a local missionary and helping self-growth and thriving, the Church has no future. He was a great visionary and there will be no one like him,” he added.

“During his time at Youth Commission as well as in dioceses, he forged personal relationship with youth and many others and people loved him because of his simplicity and cordial manner,” the pastoral coordinator said.

Apart from typical youth formation, Archbishop Costa was “dynamic” in promoting the idea that Catholic youth formation was not all about teaching, but “a journey and growing up with Jesus Christ,” he added.

The Bangladesh Catholic Student Movement, a Church-affiliated youth group called the late archbishop “a pioneer of the Bangladesh Church and guiding light for youth leadership,” in a statement.

Maulana Amjad Hossain, a Muslim cleric from Chittagong, described the archbishop’s death as the “loss of a great friend” who promoted interfaith harmony.

“Archbishop Moses was a true friend…. He was a man of dialogue who prioritized interfaith harmony. His life and idealism are great inspirations for us all,” Hossain, a Shia Muslim, told UCA News.

Born on Nov. 17, 1950, the youngest of 10 children, Moses Montu Costa entered the Little Flower Minor Seminary of Bandura in Dhaka district in 1963.

He joined Holy Cross Congregation, the largest religious order in Bangladesh in 1971 and professed his first and final vows in the Holy Cross in 1978 and 1981 respectively.

After stints as an assistant pastor in two parishes in 1981-1984, he went on to obtain licentiate degrees in theology and spirituality at St. Thomas Aquinas University in 1986 and in psychology and counseling at Pontifical Gregorian University in 1989, both in Rome.

On July 20, 1996 Pope John Paul II appointed Father Costa as the 6th bishop of Dinajpur Diocese, where he served until 2011.

Bishop Costa was appointed the 5th bishop of Chittagong in 2011 and became an archbishop when Pope Francis elevated Chittagong to an archdiocese in 2017.

Recognizing his efforts for social and economic empowerment of marginalized communities in northern Bangladesh, Christ the King Seminary in New York conferred on him an honorary doctorate in 2005. He also received the “Mother Teresa Memorial Award” in 2016.