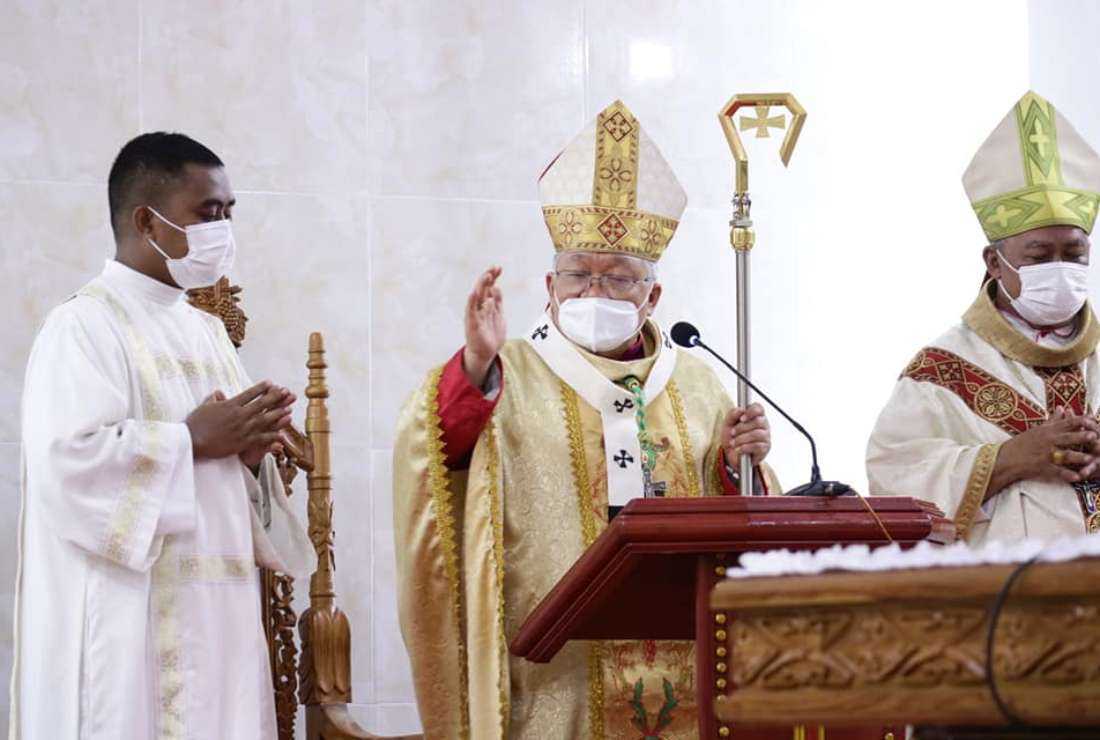 A newly installed archbishop has vowed to prioritize education, healthcare and peace in Indonesia’s Christian-majority Papua region which suffers from illiteracy and poor health services.

Sacred Heart Archbishop Petrus Canisius Mandagi was installed as the new head of the Archdiocese of Merauke in South Papua on Aug. 7, two years after Pope Francis appointed him.

Archbishop Mandagi, 73, served as the bishop of Amboina Diocese in the conflict-scarred province of Maluku since 1994 before he was appointed to Merauke on Nov. 11, 2020.

Maluku experienced deadly sectarian conflicts between Christians and Muslims. According to the International Crisis Group, at least 5,000 people died in conflicts between 1999-2002 before the government sent about 14,000 troops to quell violence and restore peace.

Archbishop Mandagi said he was scheduled to get the pallium (a white woolen band with pendants worn by archbishops) from Pope Francis on June 29 last year but failed to go to Rome due to the pandemic restrictions.

The prelate told UCA News on Aug. 8 that soon after his appointment he started pastoral services in Merauke.

“I didn’t want to wait, and I didn’t really care about when I would be installed. So, I directly started to make some improvements once I got here. I had to move,” he said.

He says his pastoral services focus on education as well as health and common welfare.

“I want to improve the Papuan people’s education because I want them to have a better future. It can only be reached through education. If I don’t do this, they can be marginalized. The Papuan people are not low-educated ones, they aren’t just given a chance yet,” he said.

He later mentioned close monitoring of Catholic schools and priestly formation as examples.

“The main issue is the competency of teachers. Their quality needs to be improved. The education character is very important. I also want to see more Papuan priests. A diocese will grow well only if it has many priests, particularly indigenous ones,” he said, adding that he has built four minor seminaries in different remote areas.

A 2021 study from Statista Research Department showed Papua province had a 78.89 percent literary rate among population above 15 years, the lowest among Indonesian provinces.

Referring to health and common welfare, he acknowledged that many still tended to live an unhealthy lifestyle and waste money.

“Merauke is rich with natural resources - fish, vegetables, rice. Still, the way people live their life needs to be improved so that they can prevent contracting diseases, including malaria,” he said.

The Annual Parasite Incidence’s latest data shows that an estimated 250,644 malaria cases occurred in Indonesia, 86 percent in the Papua region.

Archbishop Mandagi said the promotion of harmony is also important as many Muslims live in the diocesan area, which covers more than 30 parishes and serves about 180,000 Catholics.

“Building fraternity is needed. I want to make South Papua a ‘laboratory of peace.’ I don’t want local Catholics to act stupidly - fighting, killing, burning houses. These are acts of infidelity,” he said.

Daniel Taraneno from Christ the King Church in the Merauke district says the new archbishop can be “an inspirational figure who can bring peace to the society.”

“He has made some improvements following his arrival here. He has visited mission stations located in remote areas. This really makes us feel his presence despite his physical problem. His spirit motivates us,” he told UCA News.

He said that there is a growing presence of Muslims in the Catholic-majority area that has a sizable number of mosques.