This preparatory course is especially designed to help the young men and women prepare for the Central Superior Services (CSS) exam which is conducted annually to recruit people for top government positions.

“It is an initiative to help them nurture their dreams, to facilitate them to develop themselves and their families,” Archbishop Arshad told a gathering on July 19.

“I have high hopes for the students selected for the preparation of this course. It is a golden chance for them to be successful in the CSS exam,” he said.

“I will take care of the expenses of the preparatory material books and the payments of the teachers conducting classes.”

The archbishop said the Pakistani government had laid down a five percent job quota for religious minorities but added: “Unfortunately I have seen very few Christians applying for it, I look forward for these young people being at officers’ posts in the government.

“This is the first batch of 50 young Catholic men and women, I want to keep it in continuity to help and support as many young people as possible, so our people may not only apply for the 5 percent quota but also based on their own merit.

“It is the first time that the Catholic Church in Pakistan has taken the initiative to help young people to prepare for the CSS examination.”

The exam is conducted by the Federal Commission Public Service (FCPS) for the recruitment of candidates to posts up to Grade 17. 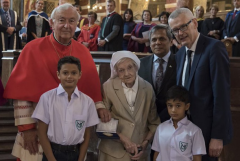 Cardinal presents medal to nun for lifetime's teaching in Pakistan

The CSS exam consists of four parts and includes a written examination, medical examination, psychological test and an oral test. Candidates must be aged 21-30 and have completed 14 years of education in post-primary school classes.

Father Sarfaraz Simon, the priest coordinating the project, said classes to prepared candidates for the CSS exam would begin on July 22 and would continue every day except Sundays for the next six months.

“Our teaching staff includes Catholics, Muslims and Hindus, who are well qualified to help students to prepare well for their CSS examinations,” he said.

One of the students, Rohail Tariq, 25, said he came to know about the initiative through his local church.

“I am lucky to have been selected for this course after passing a written exam and an interview,” he said.

“This is a big opportunity for all of us, I am thankful to the Church, especially our archbishop, for the support they have shown to the young people including me.”