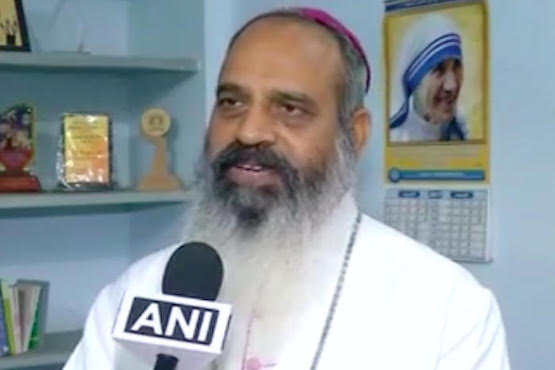 Archbishop Thomas Ignatius Macwan of Gandhinagar, who is based in Gujarat has been asked by the Election Commission to explain a letter he sent to bishops about next month's state election in the pro-Hindu BJP stronghold.  (Photo courtesy ANI)

The Indian Election Commission has asked Archbishop Thomas Ignatius Macwan in Gujarat state to explain why he wrote to Catholics asking them to pray for the election of "humane leaders" and warning against nationalist forces "taking over."

The commission served a notice Nov. 25 to the Archbishop of Gandhinagar, based in the state capital, over a letter sent to all bishops four days earlier.

The notice comes ahead of crucial state elections in Gujarat in December, which is seen as a litmus test for the ruling pro-Hindu Bharatiya Janata Party (BJP).

Archbishop Macwan's letter, which encourages the Catholic community to offer prayers, does not specifically mention any political party or candidate.

But it does warn that the result of the elections in Gujarat will be significant and influence the future course of the country because "nationalist forces are on the verge" of taking over the country.

Archbishop Macwan confirmed to ucanews.com Nov. 27 that the election commission "has sought my explanation over a word, nationalism, mentioned in one of my private communications to the bishops and religious congregations."

The archbishop said his letter was not aimed at favoring or rejecting any political party and only sought prayers from the Catholic community.

"I will explain my position to the poll panel," he told ucanews.com denying media allegations that it violated the code of conduct for elections, as it attempted to block votes for the BJP, seen as the party of Hindu nationalists.

The code of conduct for elections in India prohibits using religion, caste or ethnic affinity to seek votes for, or against, a political party or candidate. New Delhi-based lawyer Govind Yadav, who specializes in political cases, said the code of conduct involves political parties and candidates and does not cover the general public.

"Even in the case of a violation, it does not attract any serious punishment such as prison terms or a fine.  Violators are generally reprimanded and pardoned," he told ucanews.com.

"In this case, the letter never mentioned any political party or candidate. It cannot amount to any serious violation," the lawyer said.

The local branch of the federal Election Commission sent the notice to the archbishop after a complaint by a group called Legal Rights Observatory, which said the letter aimed to "generate fear" among voters and divide people on the basis of "caste and creed," local media reported.

The group is linked with pro-Hindu organizations and BJP. The BJP has been in power in the state since 1995, winning three consecutive elections in 2002, 2007 and 2012. Since Prime Minister Narendra Modi took over the leadership in Gujarat in 2001, the party has never lost a state election.

Political observers predict an emphatic win for BJP in the western Indian state, which would pave the way for the party winning power again at the 2019 general elections.

Christian groups have been complaining of increased incidents of intimidation and violence since BJP won federal government in 2014. This year alone some 600 cases of violence have been reported, Archbishop Macwan told media.

Christians, who are scattered across Gujarat, make up number 0.5 percent of the 60 million people in the state, 88 percent of those Hindus, and will have no influence on the election outcome.

"It is an unnecessary controversy," said Carmelite Bishop Jose Chittooparambil of Rajkot diocese in Gujarat. He said the archbishop's letter "was a private communication" to his fellow bishops and religious congregations and people with vested interests had leaked it to the media.

"It is natural for Christians to pray for different intentions. Praying for a successful election is nothing new, nor wrong," he said.