Memory of freedom fighters should serve as inspiration for young people, he says 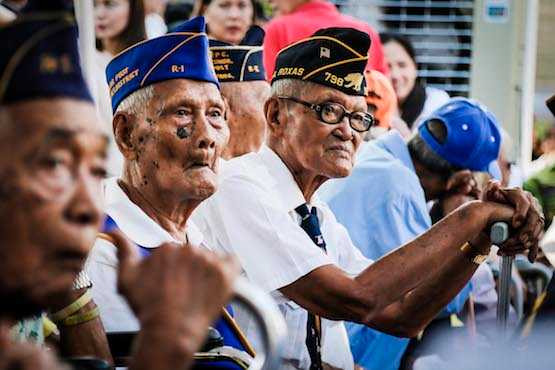 A small group of World War II veterans attends the observance of the 73rd anniversary on Jan. 9 of the landing of Allied Forces in the country that led to the liberation of the Philippines from Japanese occupation. (Photo by Karl Romano)

The memory of Filipinos who fought during the Second World War should serve as an inspiration for young people to stand up for freedom.

This was the message of Archbishop Socrates Villegas of Lingayen-Dagupan during the observance of the 73rd anniversary of the landing of allied forces to liberate the country from Japanese occupation.

The Lingayen landing resulted in the liberation of the Philippines from Japanese occupation.

Thousands of Filipino fighters fought alongside American troops. At the end of the war, Pangasinan province had the highest number of war Filipino veterans at more than 15,000.

Archbishop Villegas said the memories of war veterans should challenge Filipinos "to stand up and live that freedom, to preserve that freedom."

"We, who are able to enjoy a country without a war should be able to stand up as veterans during peace," said the prelate.

The celebration to honor surviving veterans, many of whom are bedridden, started in 2008. The government gives each veteran a monthly pension of US$100, a disability benefit of US$33, and a hospitalization benefit of US$30. They are also entitled to a burial benefit of about US$400.