Hong Kong-born Archbishop Savio Hon who has served as secretary of the Vatican's Congregation for the Evangelization of the Peoples since 2010 is named papal nuncio to Greece. (Photo by AFP)

Archbishop Savio Hon Tai-fai, the top Chinese official at the Holy See, has been appointed the apostolic nuncio to Greece

Hong Kong-born Archbishop Savio Hon has served as secretary of the Vatican's Congregation for the Evangelization of the Peoples since 2010. He was named papal nuncio to Greece, according to the Holy See Press Office bulletin Sept. 28.

Salesian Archbishop Hon was the only high-ranking Chinese official in the Roman Curia and has often encouraged Chinese Catholics to be brave and walk the path of truth and charity.

Last year, Archbishop Hon, as a top Vatican official, for the first time attended the Hong Kong observance of the World Prayer Day for the Catholic Church in China. Retired Cardinal Joseph Zen Ze-kiun of Hong Kong invited Archbishop Savio Hon Tai-fai to replace him as the main celebrant during that Mass in Hong Kong to celebrate the special day of prayer.

"It is fortunate that Christians always rely on hope during unfortunate things that happen in life," the archbishop said in his homily, referring to the current challenges the Catholic Church faces in China.

China is currently witnessing a decline in the number of those wanting to be priests and a campaign by the government since 2013 to remove crosses from churches, mostly targeting Protestants but also including some Catholics.

Archbishop Hon is closely associated with his fellow Salesian Cardinal Zen, who is well known for his aggressive anti-communism and support of Catholics at odds with the government. Cardinal Zen has been critical to Vatican overtures to Beijing.

Archbishop was not born to Catholic parents who gave him the name: Tai-Fai (in Cantonese), literally meaning “great light.”

He was baptized at the age of 10 and two years later joined the Salesian minor seminary. In 1969, he made his first profession as a Salesian.

In 2016, he was for some time appointed apostolic administrator of Agana in Guam as the local bishop came under investigation following sexual abuse allegations. Archbishop Hon told ucanews.com then that his role as "administrator" was an added service to his position as secretary of the Vatican's Congregation for the Evangelization of the Peoples. 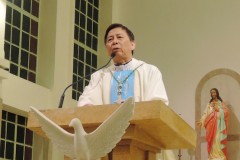