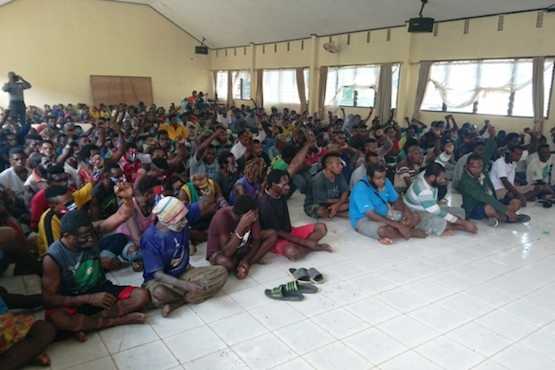 Catholic Church officials in Indonesia’s restive Papua region have called on law enforcement agencies to allow Papuans more freedom to express themselves, and not look at every protest as a seditious act.

Archbishop Nicholaus Adi Saputra of Merauke said demonstrations are the last option when channels for individual expression are stifled.

"The state guarantees democracy for all citizens," Archbishop Saputra said July 14 after hundreds of people were arrested during what organizers said were peaceful protests a day earlier in many cities across Papua.

"If space is not given to them, they will take to the streets," the prelate said.

Activists accuse Indonesia of turning Papua into a police state in order to suppress a decades old low-level separatist insurgency.

The marches on July 13 were to voice support for the full incorporation of Papua into the Melanesian Spearhead Group which was holding a summit in the Solomon Islands on 14-16 July.

The group, which includes the Solomon Islands, Fiji, Papua New Guinea and Vanuatu, aims to boost economic growth among its members. Indonesia is an associate member.

Papuans want a similar status in the grouping as the New Caledonian Kanak and Socialist National Liberation Front, an alliance of parties that want independence from France.

More than 500 people were arrested, including women and children at the July 13 rallies.

Most were later released but a small number were still being held for further questioning as of July 16. Armed police guard a hall where arrested protesters were detained in Merauke, in Papua. (Photo by Eman Riberu)

Yoseph Novaris Apay, secretary-general of the West Papua National Committee in Merauke, said the rallies were meant to tell parliament in Jakarta that the people of Papua supports membership of the Melanesian group.

"But we were stopped and arrested by heavily armed policemen," said Apay.

Admitting the police did not use violence, he said, "Psychologically, people feel intimidated when they are forced into police car and taken to police headquarters."

Father John Djonga of Jayapura Diocese told ucanews.com said police should not intimidate, terror or torture Papuans, because the situation in Papua has become a serious concern in the Asia Pacific region.

The Melanesia Spearhead Group openly support the inclusion of Papua, he said.

Papua New Guinea, which previously backed the Indonesian government has shifted to support West Papua as full member of the grouping, he added.

"This should spur the Indonesian government to find a solution to the Papua problem," Father Djonga said.

Panggrasia Yeem, a member of People’s Parliament, a rights organization banned by the Indonesian government and a rally organizer, said police repression is an effort to bridle democracy.

They should know that Papua is an international issue and cannot be settled using the laws of Indonesia.

"We are part of Melanesia," she said.

"We do not give permission for these particular groups to organize rallies," he said.