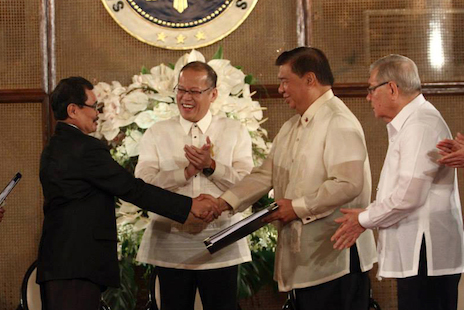 The Philippine government on Wednesday introduced a proposed law aimed at paving the way toward a formal end to four decades of war in the southern Philippines region of Mindanao.

In submitting the draft law to Congress, President Benigno Aquino said the "long and thorough process" of drafting the law aims to ensure a lasting peace in a protracted conflict that has claimed the lives of more than 100,000 people.

"Let us now open our arms for our Muslim countrymen.... We are all confident that our collective efforts towards a more progressive and more peaceful Philippines will continue," the president said. "I think this is the main antidote to whatever radicalization there might be," Iqbal told reporters following the ceremony. He added that extremism in the region would likely continue despite the political solution, but “not to the extent that it will create a problem".

Teresita Quintos Deles, the presidential adviser on the peace process, pledged that every line of the draft law would be “subjected to the sunshine of democratic debate”.

The House of Representatives has created a committee to deliberate on the proposed law as leaders of Congress promised to pass the measure by March 2015.

Once the law is passed, its residents would have to endorse it in a plebiscite scheduled for 2015.

In a statement on Wednesday, the United Nations in the Philippines welcomed the finalization of the draft law.

"This is a critical milestone in the implementation of the Comprehensive Agreement on the Bangsamoro, and a crucial achievement in ensuring lasting peace and sustainable development in Mindanao and in the wider Philippines," it said in its statement.

Governor Mujiv Hataman of the Autonomous Region in Muslim Mindanao said the law is "for the children who wish to run across school grounds instead of running for their lives".

"This law is for families who want to put life into the earth through crops and produce, no longer to dig graves for their fathers and sons who have fallen in war. This law is what will help them realize their wishes and dreams," Hataman added.