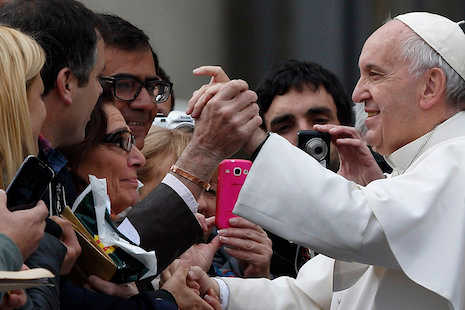 Pope Francis greets people during his general audience in St. Peter's Square at the Vatican on Oct. 21. Participants in the Synod of Bishops have moved into the final drafting phase. (Photo by CNS)

Two of the 13 final small-group reports of the Synod of Bishops on the family contained apologies: one for ways in which a lack of pastoral care may have contributed to the breakdown of marriages and one for "harsh and merciless" attitudes toward unwed mothers and their children, the divorced and homosexual people.

"We must stop continually scolding those who have failed in their first marriage without recognizing that we have some blame in that failure because we did not welcome them," said the report of Spanish Group A, read by Cardinal Jose Lacunza Maestrojuan of David, Panama.

"In the same way, there must be an end to the elitist and narrow-minded attitudes many members of the Christian community have toward them."

Presenting its report late Oct. 20, the German-language group said its members felt called to admit that "in an ill-conceived attempt to respect the doctrine of the church, repeatedly we have had harsh and merciless pastoral attitudes that created suffering, especially for unwed mothers and child born out of wedlock," cohabiting couples, homosexual people and those who are divorced and civilly remarried.

"As bishops in our church, we ask forgiveness," said the report unanimously approved by the group's members, including Cardinal Gerhard Muller, prefect of the Congregation for the Doctrine of the Faith, and Cardinal Walter Kasper, a theologian and former president of the Pontifical Council for Promoting Christian Unity.

The synod moved into its final drafting phase after the reading of the small group reports late Oct. 20; the reports were released by the Vatican the next day. A 10-member committee was to take the reports each group made on the three chapters of the working document and draft a final text, which would be submitted to a paragraph-by-paragraph vote.

The reports read Oct. 20 focused on the third part of the synod's working document, "The Mission of the Family Today," and included the most contested part of the synod agenda: pastoral responses to the divorced and civilly remarried as well as other Catholics in situations the church traditionally has described as "irregular."

On the proposal of finding some process that eventually could lead some divorced and civilly remarried Catholics to receiving absolution and Communion, three groups said the majority of their members were in favor; three groups said their members were too divided to say; three others recommended further study of the matter, perhaps by a commission of experts; and two groups insisted church practice should stay as it is. The final two groups did not state their members' position on the matter.

In general, current church practice is that without an annulment of their first union, couples who are divorced and civilly remarried may not receive the sacraments. In some cases, after careful consultation with a priest, couples who promise to abstain from sexual relations in their new union are permitted to go to confession, receive absolution and begin receiving Communion again.

While several groups repeated calls for more respectful language and welcoming attitudes toward homosexual people, none of them spoke of accepting same-sex unions. Most groups included an explicit statement defining marriage as the lifelong union of one man and one woman.

Several groups praised Pope Francis for issuing in September new rules that make the church's annulment process less costly for everyone and much quicker for those with unions that obviously were not valid sacramentally; he removed the need for an automatic appeal of declarations of nullity.

The German-speaking group provided the most detailed suggestions for responding to divorced and civilly remarried Catholics who want to receive the sacraments but, members said, "the discussions demonstrated that there are no simple and general solutions."

They cited St. John Paul II's statement in the 1981 exhortation "Familiaris Consortio," that pastors "must know that, for the sake of truth, they are obliged to exercise careful discernment of situations."

Together with a qualified priest, the German group said, such Catholics should be led through a deep examination of conscience, reflection and repentance. Among other questions, they should look at how the crisis in their marriage effected their children, if they attempted reconciliation, the current situation of their former partner, the impact of the new relationship on their children and extended family and what example they are giving to the young about marriage.