The Gospel, the Good News, is about God’s immeasurable love, not about divine vindictiveness Eutychus fell asleep during a sermon by St. Paul and plunged from a window.

Some overlooked characters in Scripture attract me.

One is Eutychus in the Acts of the Apostles 20:9. His claim to fame is that he fell asleep during a sermon by St. Paul, becoming first in a long line of liturgical dozers. And Paul has had many sleep-inducing preachers as disciples.

Another character to whom I am drawn is in the earliest gospel, the first to recognize who Jesus is and to announce it. That one is the first of a long line of not always holy missionaries. In fact, it is a demon.

Mark’s Gospel (1:21-24) tells us that Jesus went into a Capernaum synagogue and began to preach. While he was teaching, an unclean spirit that had possessed a man in the congregation cried out, “What have you to do with us, Jesus of Nazareth? Have you come to destroy us? I know who you are, the Holy One of God.”

This is the first time in the Gospel that someone recognizes Jesus for who he really is and the first time it is proclaimed publicly. I wonder if the demon got into trouble with the “lower-downs” over that carelessly blurted proclamation.

That demon has at least one more unlikely coworker in Mark’s Gospel. The Gospel’s climactic proclamation of who Jesus is comes from a pagan, the Roman centurion at the crucifixion who said, “Truly this man was God’s Son!” From beginning to end, Mark thinks it important that the Good News can be proclaimed by unlikely, even enemy, voices.

I have long hoped and prayed that somehow that demon might find a place in the Kingdom of God as a reward for that inadvertent missionary activity. After all, in his letter to the Christians of Philippi, St. Paul says, “Some proclaim Christ from envy and rivalry, but others from goodwill ... What does it matter? Just this, that Christ is proclaimed in every way, whether out of false motives or true; and in that I rejoice.” (Phil. 1:15-18)

There are people who seem to take delight in declaring that certain others are damned, sometimes for trivial reasons. When I was a boy, a hot dog on Friday was enough to “merit” eternal punishment.

What bothers me about these self-appointed judges is that they seem gleeful rather than heartbroken that a beloved child of God could be bound for unlimited perdition. People who can blithely consider the damnation of others never seem to wonder or worry about what Jesus who said, “Judge not” might say at their own judgment.

Even St. Thomas Aquinas lists among the pleasures of those in heaven the opportunity to be spectators of the sufferings of those in hell. If I (assuming I were in the viewing stands) could watch with pleasure the suffering of someone I loved, would I even be me? And what of God who loves infinitely more? Would God be God? ‘The period was so far like the present period ...’* 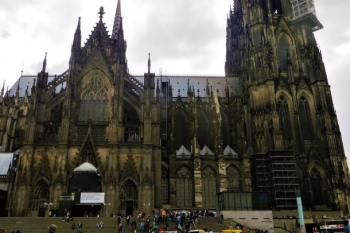 It would be an interesting exercise to take a notepad and a newly sharpened pencil and record all the verses in the New Testament that indicate that the purpose of discipleship is individual rescue from hellfire. Try it, and you will not have to resharpen the pencil.

The Gospel, the Good News, is about God’s immeasurable love, not about divine vindictiveness. That love can forgive the worst of all sins, the murder of God: “Father, forgive them.” (Lk. 23:34)

Would such love mandate eternal punishment for sin committed within time by an imperfect being who lives for a short while? That is a question that theologians have pondered since at least the patristic period, the early post-apostolic times.

St. Gregory of Nyssa (c. 335 - c. 395), influenced by Origen and perhaps even more by his sister St. Macrina, speculated that those suffering in hell and even the demons might eventually find a place in the Kingdom, what Gregory calls Christ’s “world of goodness.”

In other words, what we call hell might be purgative rather than punitive. The purgation may take a long time (if time has any meaning in eternity), but eventually those being cleansed would be ready to accept the love of God that never left them.

The Greek term for this idea (recall that the ancient language of the Church is not Latin but Greek) is apocatastasis, restoration to what God intends in and for creation. Can I or anyone else by our sin thwart forever God’s intention to embrace us all in love?

Origen’s version of apocatastasis was later rejected, but does that mean all understandings of it are thereby condemned? Gregory of Nyssa remains revered as a saint and Church Father not only by Catholics but also by Orthodox, Eastern Christian, Anglican and Lutheran Christians.

I, for one, hope that someday God’s love for both of us will allow me to share eternal joy with that demon. And Eutychus. And you.