Anwar Ibrahim — is he for real? 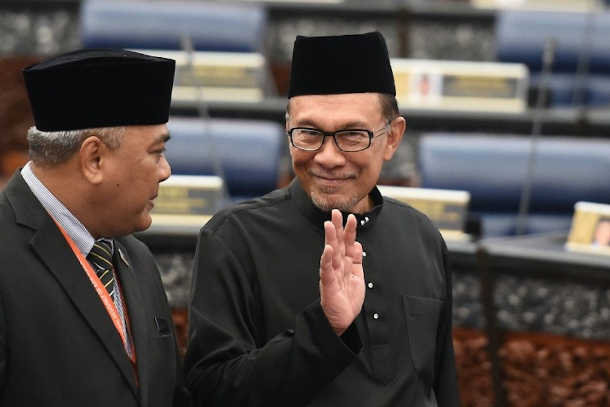 Malaysia's People's Justice Party president and leader of the Pakatan Harapan coalition Anwar Ibrahim, right, waves before taking an oath as a member of parliament during a swearing-in ceremony at Parliament House in Kuala Lumpur on Oct. 15. (Photo by Mohd Rasfan/AFP)

Anwar Ibrahim is back on the path to becoming Malaysia's prime minister when current leader Mahathir Mohamad steps down in two years' time.

Three years after he was jailed for sodomy and four months after he was released from prison and granted a full pardon by the king, he won a parliamentary seat to seal his return to frontline Malaysian politics.

According to the country's election commission, Anwar's victory in the Oct. 13 Port Dickson by-election was emphatic.

He received 71 percent of the votes in a contest which pitted him against a hodgepodge of independents and a candidate from the Islamist party PAS.

Mahathir, his erstwhile rival, now in a rush to correct the mistakes he made during his first stint in power from 1981 to 2003, has welcomed him back and promised to hand over power to the man he sacked as his deputy in 1998.

It's an intriguing tale. Both Mahathir and Anwar were then in power as part of the Barisan Nasional (BN) coalition government, as prime minister and deputy, respectively, before their famous falling out over economic policy as the Asian financial crisis started to take a toll on the country.

Anwar up to then had been seen as Mahathir's heir apparent. Their relationship quickly soured after a leadership dispute and Mahathir sacked him as his deputy.

He was then jailed on corruption and sodomy charges that were widely regarded as politically motivated.

In 2004, his sodomy conviction was overturned and he led the opposition to unprecedented gains in the 2008 and 2013 general elections but remained short of victory.

Just as he began to establish himself, his acquittal was overturned in 2014 and he was sent back to jail to finish his nine-year term.

Anwar insists he holds no malice towards his former mentor and will support the 93 year old who helped Pakatan Harapan, the alliance that ended more than six decades of rule by the BN coalition in May, as a backbencher.

But there are concerns about Anwar and the type of administration he will lead when he takes power in two years' time.

That neither his wife nor daughter made way for him to contest a seat in parliament adds a whiff of nepotism to the family.

During his election campaign, Anwar, 71, said that when he takes charge of the country there will be more changes in store. He didn't spell them out.

There were some early jitters about what could be in store when he attacked as "super liberals" those who have been strident about reform and equal rights, saying they were trying to impose acceptance of LGBTI lifestyles on the majority. He warned Malaysians against the "tyranny of the minority."

It was a curious attack coming from a man whom many consider to be a champion of Malaysian democracy.

Those he calls "super liberals" were his saviors; they marched against the injustice of his plight, campaigned for democracy, and finally helped topple the government that imprisoned him.

His warning was not lost on the older generation who remember Anwar's role in Islamising schools, universities and the civil service, and launching the country on a slippery slope to the polarised Malaysia of today.

On trips overseas he often talks about democracy in the "new Malaysia," but at home he focuses on the Malay majority, just as Najib did.

He's also been called out for endorsing his friend, the despotic Turkish President Recep Tayyip Erdogan.

His recent comments on the campaign trail have confused many.

While calling to repeal a colonial-era penal code outlawing homosexuality — the very law used to imprison him — at the same time he has said that LGBTI people should not be accepted.

The double-talk doesn't inspire confidence in his leadership. Critics note he is beginning to sound more like an apologist for the Islamic conservatives that were taking the country toward an uncertain future than an advocate for true democracy in Malaysia.

People remember he has a background in racial and religious politics with the Muslim youth movement, and of course his time with the United Malays National Organization (UMNO), Malaysia's main opposition party.

They feel he is playing to the Malay and Muslim majority and their insecurities when he scolds minorities for demanding equality.

Anwar should know that those calling for fairness and equality are not the enemy he makes them out to be.

Malaysians can be forgiven for asking if the reform drive will fade when he takes power. It's a big question because for much of their lives, politicians have made pledges only to either reverse them or ignore them altogether. What price is paid when a promise is broken? After 61 years of BN rule, the evidence is right in front of them.

While Anwar may have finally got his foot in the door in his quest to be Malaysia's eighth prime minister in a couple of years' time, he should remember that the final say will be made by Malaysians.

It would be a folly to ignore the mood for change in Malaysia.