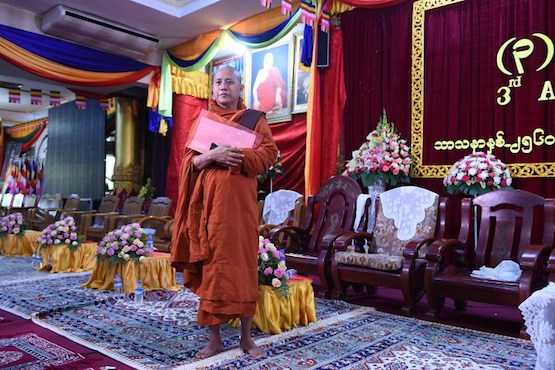 Myanmar hardline Buddhist monk Wirathu in a monastery on the outskirts of Yangon on June 4, 2016. (Photo by Romero Gacad/AFP)

Religious leaders in Myanmar agree with a ban that stops an anti-Muslim monk giving sermons but they say that more needs to be done to address hate speech in the country.

Government-backed monks from the State Sangha Maha Nayaka Committee announced that Venerable U Wirathu, a Buddhist monk, has been barred from preaching sermons for a year effective March 10.

"As he has repeatedly preached hate speech against religions to fuel communal strife and hinders efforts to uphold the rule of law, the monk was barred from delivering sermons across Myanmar," the top religious body said in a statement on March 11.

U Wirathu will face "action under the rule of law if he breaches any of the order," said the Sangha without elaborating on a specific punishment.

Responding to the news, Father Maurice Nyunt Wai, executive secretary of the Catholic Bishops' Conference of Myanmar, said it is right to curb hate speech, as religious people need to preach love and kindness instead of hate and division.

"As a long-term plan, we all need to offer the younger generation with an education that opposes hate speech while promoting diversity and harmony among religions," Father Nyunt Wai told ucanews.com.

The priest said he was concerned by the diffusion of hate speech via social media, something which he believes is a now a problem nationwide.

"Those who are spreading hate speech are well-organized and they are doing it for political purposes," Father Nyunt Wai said.

Ashin Pyin Nyar Thiha, a Buddhist monk from Yangon who is actively involved in interfaith programs, said the State Sangha's move is an effort towards creating a more peaceful and harmonious society.

"U Wirathu may not like the Sangha's order and if he continues to defy it by preaching hate speech, I think another step of action will be followed," Ashin Thiha told ucanews.com.

Kyaw Nyein, secretary of the Ulama Islamic Organization, said what the State Sangha has done is just a token effort according to religious rules and regulations.

"Even Buddhist monks and many Buddhists acknowledged that U Wirathu's way of preaching is against Buddhism," Kyaw Nyein who is a lawyer told ucanews.com. "But it is weak legal action taken by the religious ministry so far," he said.

In protest of the order, U Wirathu taped his mouth shut as he attended a preaching ceremony in a village in Ayeyarwaddy division on March 11.

U Wirathu's brand of extreme Buddhist nationalism and anti-Muslim rhetoric is a growing force in Myanmar society where the Buddhist majority treat monks with high regard.

U Wirathu is the vice-chair of the Buddhist nationalist group, the Committee for the Protection of Race and Religion known as "Ma Ba Tha." He was also the one-time leader of the local Buddhist extremist campaign known as 969 that called for the boycott of Muslim businesses.

His anti-Muslim rhetoric in the past fueled communal riots that erupted across the country from 2013 to 2014.

More recently, U Wirathu hailed the men accused of planning the January assassination of Ko Ni, a high-profile Muslim lawyer, as defenders of Myanmar's race and religion.