The most dangerous states were Jharkhand, Odisha and Chhattisgarh, where six Christians were killed this year 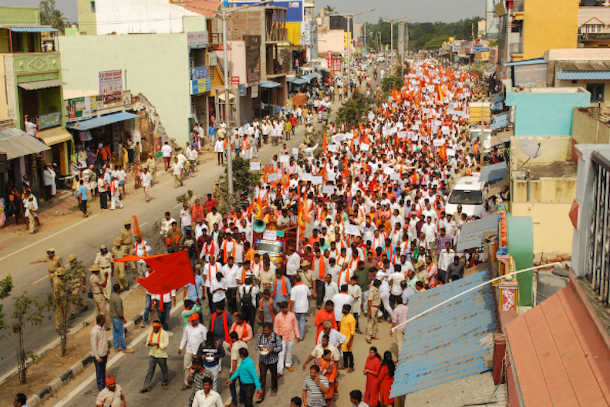 Hindu activists take part in a demonstration against a planned statue of Jesus Christ in Ramanagar in India's Karnataka state on Jan. 13. A new report details increasing violence against Christians in India. (Photo: AFP)

Two women were raped and killed among six Christians murdered for their faith in India in the first half of this year, according to a newly released report.

Three others — two Christian women and a 10-year-old girl — were raped for their refusal to give up their new faith, said the half-yearly report released on July 28 by Persecution Relief, a Christian group. Persecution Relief, an ecumenical body that records Christians' persecution in India, said its data shows "a very grim picture" of religious freedom in Hindu-majority India. "Hate crimes against Christians in India have risen by an alarming 40.87 percent despite a nationwide lockdown in place since March 25 in the country," the report stated.Between January and June, India witnessed 293 cases of hate crimes against Christians, including five rapes and six murders. "Persecution against Christians has become very common," said Shibu Thomas, who founded Persecution Relief, which assists Christians in distress, especially widows and orphans of those killed for their faith.Thomas told UCA News on July 28 that in most cases the attackers are right-wing Hindus who want to turn India a Hindu-only nation. "They are opposed to Christians and missionary work." Since the pro-Hindu Bharatiya Janata Party (BJP) came to power in New Delhi and several Indian states in 2014, these groups "get tacit support from the ruling dispensations in several states," Thomas said.Crimes against Christians have been reported from at least 22 of the 28 Indian states. Besides rape and murder, they include social excommunication, threats, physical assault, setting houses and churches on fire and preventing Christians from using common water sources."The spread of religious intolerance against the minuscule Christian minority" who form only 2.3 percent of India's 1.3 billion people shows the growth of the ideology of Hindu nationhood, Thomas said."The frightening and contagious crusade of religious nationalism and intolerance has now peaked at new inhuman altitudes," Thomas said.The data collected "is the tip of an iceberg. We could report only a fraction of the actual violence perpetrated against Christians in various states," he said.The largest number of attacks, 21 percent, took place in Uttar Pradesh, the most populous Indian state.The other most dangerous states were Jharkhand, Odisha and Chhattisgarh, where most Christians come from socially poor Dalit and tribal backgrounds. All six murders in the past six months were reported from these states.In the past four years, India has witnessed 1,774 violent incidents, an average of 443 each year. But in the past six months 293 attacks were reported, showing an increasing trend.Thomas said Persecution Relief's numbers are not exhaustive as the group only records cases reported to them."Many people do not report, fearing retribution from the tormentors and administrative machinery. Some cases in interior villages also go unreported because they are so cut off without electricity and phone connectivity," Thomas said. The report said that over the past seven years India has risen from number 31 to 10 on Open Doors' World Watch List, ranking just behind Iran for the severity of persecution.The United States' Commission on International Religious Freedom in its 2020 report listed India as a country of particular concern along with China and North Korea, where religious freedom is severely crippled.