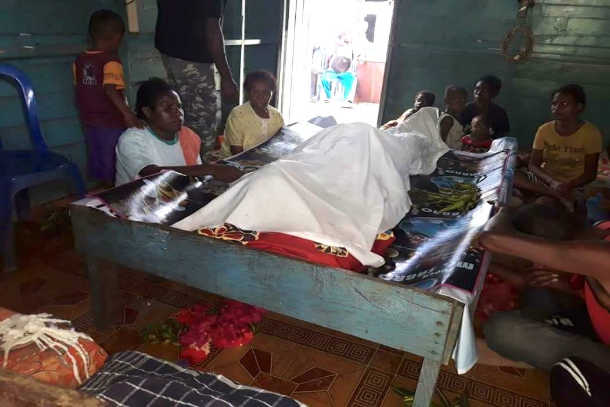 Family members mourn over the body of Yudas Gebze at his home in Ilwahab, in Papua’s Merauke district. (Photo supplied)

Human rights and church activists have called for an investigation following the death last week of an indigenous Papuan who died in police custody.

Yudas Gebze, from the Malind tribal group died on Sept. 14, a day after he was arrested in Ilwahab, in Papua province's Merauke district for allegedly chopping off a man's right hand with a machete.

He had spent three months on the run prior to his arrest following the alleged machete incident.

In a joint statement, Amnesty International Indonesia and Pusaka, an Indonesian NGO working for indigenous people's rights, called for a prompt, independent, impartial and effective investigation into allegations of torture leading to Gebze's death.

They said several wounds to his head, hands, thighs, and back were the result of torture by security forces.

According to police spokesman, Ahmad Musthofa Kamal, Gebze died from a heart attack.

"Injuries to his body were not the cause of death, he died of a heart attack," he claimed, citing an autopsy report.

He claimed Gebze fell on broken glass while trying to resist arrest. Police took him to hospital, where he died a few hours later.

Yosafat Franky from Pusaka told ucanews.com on Sept. 25 the police's version of events did not sufficiently explain the wounds and that photos of Gebze reveal that he may have been the victim of torture.

He cast doubt on the autopsy because a doctor from the police forensic team carried it out.

Members of the victim's family witnessed the autopsy but the absence of an independent forensic expert breached impartiality requirements, he said.

"A prompt, independent and impartial investigation is required to avoid similar cases from occurring," he said.

The dead man's family said they want a fact-finding team to investigate the case and present its findings in court.

Human rights defender, Father John Djonga, said the police must show transparency when handling cases such as these.

"Based on the long history of violence against the Papuan people, there is lack of trust in Indonesian authorities," he told ucanews.com.

According to Amnesty International Indonesia there have been 95 cases of extrajudicial killing in Papua since 2010. Of those cases 85 were indigenous Papuans.