Another mob lynching over blasphemy claims in Pakistan

Mushtaq Ahmad, a mentally ill person, was stoned to death for desecrating the Quran in Punjab province 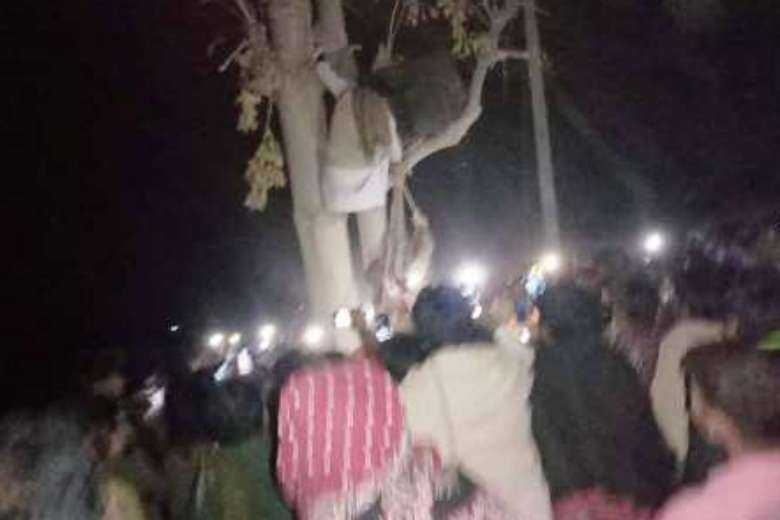 The lynch mob with the body of Mushtaq Ahmad tied to a tree in Talumba in Pakistan's Punjab province on Feb. 12. (Photo supplied)

Two months after the lynching of a Sri Lankan over blasphemy allegations, a mentally ill person was brutally stoned to death for allegedly desecrating the Quran in Pakistan’s Punjab province.

An enraged mod lynched Mushtaq Ahmad after the son of a cleric accused him of burning pages of the Quran in a mosque of Talumba town in Khanewal district on Feb. 12.

“People were raising slogans and beating a person tied with ropes. Police tried to dissuade them but they kept beating him. They were armed with batons, hockey sticks, axes and rods. They later hung his body at a tree,” stated the police’s first information report registered against a mob of 300 persons.

Police said they had so far arrested 62 suspects for being part of the mob.

Mob killings over accusations of blasphemy — a crime that carries the death sentence — are frequent in the Muslim-majority country.

On Dec. 3, sporting goods factory workers in the eastern city of Sialkot lynched and burned the body of their Sri Lankan manager in an attack that Prime Minister Imran Khan said brought shame on the country.

How can some Muslims, who believe to be his followers, claim his holy personage and Islam after killing someone only on the basis of an accusation?

Khan also condemned the latest killing. “We have zero tolerance for anyone taking the law into their own hands & mob lynchings will be dealt with full severity of the law. Have asked Punjab IG for report on action taken against perpetrators of the lynching in Mian Channu & against the police who failed in their duty,” he stated in a tweet.

“Rehmatul-lil-Alameen (Mercy for all the worlds) even forgave those who stoned him,” stated Chaman Lal, the Hindu chairman of the Samaj Sewa Foundation, in a Facebook post.

“How can some Muslims, who believe to be his followers, claim his holy personage and Islam after killing someone only on the basis of an accusation? This is against the teachings of Islam. Both Islam and Muslims of today are going in different directions,” he said.

Special Representative to Prime Minister on Religious Harmony Hafiz Tahir Ashrafi condemned the culture of being "judge, jury and executioner."

Addressing a press conference in Khanewal on Feb 13, he called on the Chief Justice of Pakistan to conduct speedy trials in blasphemy cases.

“No one should think of running the country as per their own desires. No person possessed the right to kill another. The legal route should be adopted to lodge complaints instead of resorting to vigilante justice,” he said, adding that such actions were against the teachings of Prophet Muhammad.

The interfaith Rawadari Tehreek (Movement for Tolerance) called for an independent commission to investigate all blasphemy incidents and restart the trial of those involved.

“The whole state apparatus has not been able to stop the mob violence and evolve any mechanisms to refrain from false blasphemy accusations. In most of the incidents, the police were a silent spectator while the accused involved in the mob violence were set free by the courts. There has hardly been any instance where the perpetrators were held accountable and punished,” stated Samson Salamat, chairman of Rawadari Tehreek, in a press release.