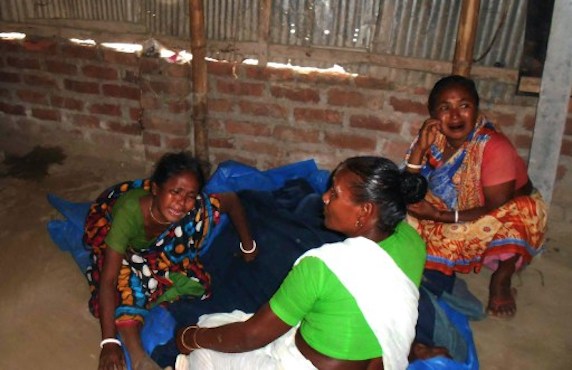 Bangladeshi relatives of a Hindu priest grieve after he was killed in the remote northern district of Panchagarh on Feb. 21. On  July 1, Shymanondo Das, 50, was attacked with machetes. Das is the third Hindu priest and temple worker killed allegedly by suspected militants in less than a month. (Photo by AFP)

A Hindu priest was hacked to death in southwestern Bangladesh on July 1 in the latest attack on religious minorities by alleged Islamic militants in the Muslim-majority country.

"We are concerned and panicked that one after another innocent people from religious minority groups are being killed. Despite promises of protection from the police and administration, everyone including the Christian community is living in fear," said Father James Mondol, convener of Justice and Peace Commission in Khulna Diocese, which covers Jhenaidah district where the murder took place.

Three motorbike-riding assailants attacked Shymanondo Das, 50, a priest who helped conduct prayers at Radhamadan Bigraha Math, with machetes while he was walking along the highway near the temple in the morning, police said.

"He sustained serious injuries to the neck and head. He was rushed to hospital but succumbed to excessive bleeding," said Hasan Hafizur Rahman, officer in-charge of the local police station.

"He was a simple and devout man who used to move from temple to temple to conduct prayers for Hindu devotees. We do not know who was behind this killing, but the attack is similar to recent killings by suspected militants," the police official said. "We don’t know what the attackers want to achieve with such brutality. They must be stopped at any cost. People are sad and anxious, they want to live in peace," said Father Mondol, who is also assistant parish priest of Muzgunni Catholic Church in Khulna.

Das is the third Hindu priest and temple worker killed allegedly by suspected militants in less than one month.

The killings are part of a series of targeted killings atheist bloggers, liberal intellectuals and religious minorities by suspected militants since 2013, which claimed more than 40 lives so far.