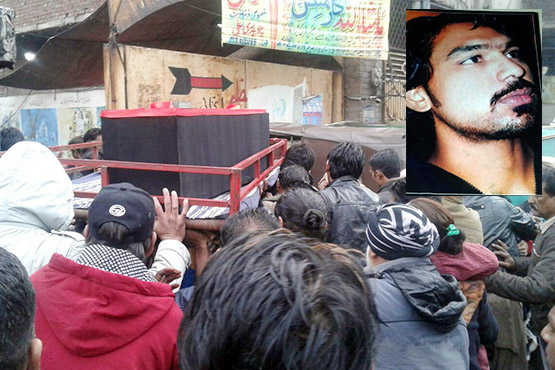 The funeral of Usman Shaukat, 29, (photo inset) in Joseph Colony Lahore, Punjab, Dec. 11. Shaukat died in prison Dec. 9, supposedly of a heart attack, although doubts linger in the local Christian community over the cause of death. (Photo provided)

A second Pakistani Christian has been found dead in a Lahore jail where he spent two years following the killing of two Muslims then suspected of having links to terrorist bombers.

About 300 Christians attended the Dec. 11 funeral of Usman Shaukat, 29, despite heavy rain in the "Joseph Colony" of Lahore, capital of restive Punjab Province.

Shaukat died in prison on Dec. 9 and was one of 42 Christians on trial over the lynchings.

On March 15, 2015, two terrorist bombs in Lahore - one at St John’s Catholic Church and the other at Christ Church – killed at least 15 people.

A Christian mob then lynched the two Muslims.

There were claims at the time that the Muslim men who were lynched were not involved with the Islamic militants who bombed the churches.

And no such link was ever established amid indications the murdered men were merely passers-by.

Church leaders maintain that most of those in prison were arbitrarily arrested, not having been identified in a video recording of the lynchings.

This time they maintained that Usman Shaukat died of a heart attack.

However, Kamran Shaukat claims that his now deceased brother was "perfectly healthy" when they met him in jail on Monday Dec. 4.

"Both his daughters, aged 3 and 5, cry for their abbu (father)," Kamran said.

"We are still in shock, but we don’t blame anybody.

"Our matter rests with God."

But Pastor Irshad Ashknaz, vicar at Lahore's bombed Christ Church, fears for the life of other inmates.

He said there was speculation of foul play in the prison deaths, but no proof.

He noted that several families had fled the district fearing that there could be false accusations against them of involvement in the lynchings of the Muslim men.

"We have held several meetings with police and government officials, but nobody is listening," Pastor Ashknaz said.

"We are helpless and do not know what to do."

He said medical treatment was still being denied to imprisoned Christians on trial.

"It’s a conspiracy to kill all Christian prisoners," he said.