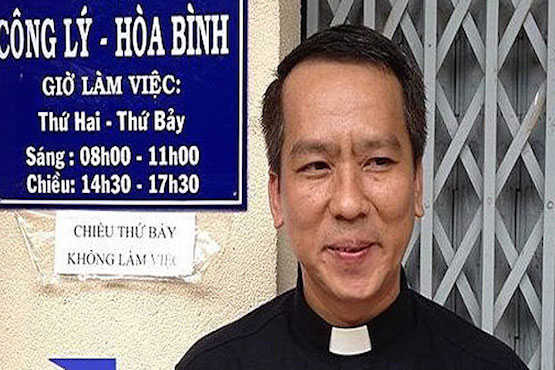 A communist mob of armed with pistols, batons, and pepper spray descended on a Catholic church in southeast Vietnam’s Dong Nai province on Sept. 4 to confront the local priest after he called for political reform in the one-party country

Tan identified at least one of the harassing group as a member of a local pro-government activist group, Tan told Radio Free Asia. "I recognized Nguyen Trong Nghia of the Red Flags group," Tan said, adding that he saw other signs of support for the group from local police and other officials. "Commune security kept inviting them back to their office, and district security officers behaved the same way, refusing to do any work at the scene. They wouldn’t note down the registration numbers of the guns or count how many bullets they had," Father Tan said. Tan told RFA he didn’t press charges because they were all Communist Party supporters. "There would have been no point in pushing for prosecution," he said. Writing on Facebook, Tan said he rang the church’s bell to alert parishioners in the neighborhood to come to help when the mob arrived. Parishioners then briefly held 13 of the invading group, who said they were Catholics and that they were angry with the priest because he had wanted to "overthrow the Communist Party and government of Vietnam."